Well.. that could have gone better

Share All sharing options for: Well.. that could have gone better 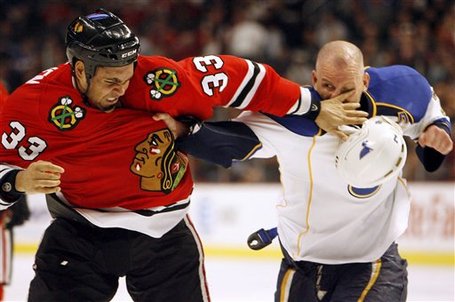 First of all, this post is brought to you by Half Acre Brewery.. not in that they paid me to write it or anything.  Quite the opposite actually - I bought the beer, Over Ale to be specific, and enjoyed it throughout the game.  It's a Chicago business and it's damn good.  Better than any swill you'll buy from St. Louis via Belgium.

Overall, it was an entertaining game, but not one with the outcome I wanted to start this blog on. I was secretly hoping Koci would have suited up for this game just to see someone like Bolland kick his ass.

That didn't happen though - instead we get this perfect example of a let-down game.  I got a bad feeling right before the puck drop and it came true as a bad start led to the downfall of the Hawks in this game.  They continue to get points but fail to grab more than one in this game. This is a game they should have won and that they'll need to win as the season goes on.

Fights happened early and often, but only in the first.  Blues scoring was the same way except for the final goal when it counted the most.  It was good to see a physical game from the Hawks though.

It's a bit early for someone like Grants to be offering free electronics if the Hawks win the cup this year though don't you think?  They almost had me buying a TV when the Cubs were playing so well, but I don't think this team has a chance at the cup just yet.  Give me a few years and there's a good chance I'll be enough of a homer to go through with it.

Hopefully I don't mess up anything in this post so none of these jerks on SB Nation can make fun of me.. I don't count on it though and I partly blame Half Acre.

A more detailed review follows after the jump:

This game started off hilariously with an interview with Goaltending Coach Stephane Waite - if only for his great accent while talking about what it's like to work with "Abby" and "Huey".

Other sites have mentioned it - but the anthem just doesn't sound good on TV.  The singer has to shout just to hear himself sing over the crowd but they don't have the crowd mic'd directly so you can barely hear them on TV - just the singer shouting the anthem.

The game started off with bodies flying.  Ladd was all over the ice hitting people only to get up slow after  a hit by Tkachuk who immediately gets rocked by Eager taking over for the downed Ladd.

Burish grabs a great pass from Barker but he's Burish so nothing happens other than a penalty against the Blues - Buff later can't handle the puck at the point and the Blues grab a break away - Campbell goes down to block it but the puck gets over him and into the net.. shorthanded goals suck... 1-0 Blues..

Minutes later Perron leads a three on two and tries to pass but Sopel does the only thing he's good at and blocks the puck.  Only the puck bounces right back to Perron and he goes five-hole for the goal.  Who the hell is this Perron and where did he come from?  He was playing out of his head and making the Hawks look foolish all night.  2-0 Blues

Almost exactly a minute later the Hawks show off some of the great passing we've seen over the past few weeks - win the face off in their zone and get all 5 Hawks to touch the puck before Buff puts in a pass from Ladd.  Just a pretty play..  2-1.. still Blues

Sharp draws the Hawks first penalty of the game - but the Hawks kill it.  Close after it ends though Havlat drops to the ice after being barely touched which leads to yet another Blues goal.  They play it simple, just getting the puck to the net and continually hacking at it til they hear a whistle.  Paddock gets the last hack and it's in... 3-1 Blues

That's when the game really got crazy - Buff puts a good hit on Jackman which results in a big shoving match.  Finally Seabrook drops the gloves with Woywitka and Seabs comes away with an easy win and a 5 minute fighting major.

Less than 30 seconds later, Barker goes toe to toe with Backes only Comcast takes a while to cut to it - Would have been better not to see though since Barker definitely loses this one, which is what we expect of a Hawks player this year. Backes does get a game misconduct though but I missed why - because he didn't tie down his jersey?

Random question - is it required to wear those CBOE hats if you win the auction for their seats?  Do you just get a discount on whatever you bid if you wear it?  odd..

Just a minute after that we get yet another fight as Tkachuk takes on Byfuglien.  Thankfully, Buff helped move Tkachuk's jaw a few inches to the right after he's the first to get up after they both go down - might be a bit of a cheap shot but I certainly don't mind.  Even better, Tkachuk gets two extra minutes for a cross check.  Nothing happens though - Blues kill it.

It takes over three minutes for the next, and final, fight to start.  This time the 55's go after each other as Janssen and Eager go after each other.  Janssen gets a take down but Eager lands the only punches - therefore, he wins - don't listen to what St. Louis Game Time says about it.

Another penalty.. another kill - Hawks PP just doesn't get anything done this game.

After an exciting first the Hawks are down 3-1 but oddly are up 3-1 on the fight card, by my count - we'll see what everyone at Hockey Fights says later.

That's the end of the first...

The second period seems to fly by with no real stoppages til Seabrook takes a penalty.  It works out best of the Hawks though as Bolland gets the puck on a break away and just barely gets the puck past the skate of Legace and bounces it off his other leg to even up the shorthanded goals for both teams.  3-2

Hawks and Blues trade penalties throughout the rest of the period - which reminds me that my favorite part of Sopel taking a penalty is that we know we don't have to see him on the ice for a while.  It's a good feeling..

Versteeg (aka - Dark Horse Calder Candidate?) has one of the more embarrassing swing and miss shots I've seen - It's not often you see a guy just completely fall over after a whiff like that.. yikes.  His miss ends with a great rush by the Blues and a save that even Khabby wasn't sure he made - he checks the back of the net before realizing it's in his glove.

The second ends quickly compared to the first.

The Hawks get some good pressure early in the third and Pat keeps mentioning people getting "rubbed off" along the boards - which makes me laugh every time.

Just under three in - Bolland does it again.  Ladd takes advantage of a Blues player going after a dropped stick and gets a great pass to Bolland from behind the net - 3-3

Keith saves the game on an amazing play.. he looked beat but somehow gets his stick around to knock the puck away from a Blues player who had a straight shot at Khabby - how the hell is he not on the all-star ballot?  wow - amazing play

Khabby gets away with a clear interference after he checks Tkachuk along the boards after he can't clear the puck - but hey, who's counting?

Seabrook takes another penalty but it's killed even after not being able to get a whistle on the call for what felt like an hour.  Big save by Khabby once again.

Sharp doesn't see a puck as he had a clear open net chance - that one hurt.

Tkachuk takes another penalty but the Hawks can't do anything even with Seabrook making two great plays on the blue line to keep it in the zone.  So we go to over time which means the Hawks keep the point streak and the undefeated-in-regulation-at-home streak alive.. so that's nice

It sucks for Bolland to be in the box in OT on that call since he had a great game 2 goals and an assist.

Hawks now have a big game against the Sharks to finish their homestand before hitting the road for the circus road trip..  A win could be huge.

Thanks for reading (if you made it this far) and thanks to everyone at St. Louis Game Time for their support of the Committed Indian and the fun live blog during the game.  I still hate your team though