Share All sharing options for: Preview: Hawks at Stars

The Men of Four Feathers head into what has been akin to the Saw house for them (I'm only assuming it all takes place in one place in Saw, I haven't bothered to see any of them.  After all, if I want to be horrified and disgusted, I'll watch the Bulls.).  The Hawks have managed just one victory in seven seasons in the town that somehow fits Jerry Jones and Mark Cuban's ego into it, which can't be easy.

Things have not gone Dallas's way this year.  Stars fans lined up to tell us that once Zubov and Lehtinen returned from injury, things would be better. 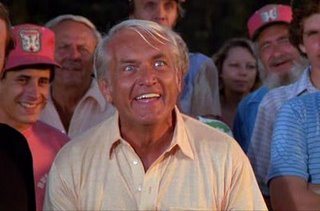 Frankly, it's not going to matter if Marty Turco is going to continue to make children weep with his play.  A SV% of .870 and a GAA of 3.57 is not what you pin Cup hopes on.  We're not sure what you pin on it, unless you want whatever's pinned to smell.  Bad.  And we're not surprised.  We think this Dallas team has been overrated from the word go.  Short on scoring, long on annoying forwards who don't do much other than annoy, pylon like d-men outside of Zubov.  Apparently, Brett Hull thought the blue line corps was too mobile, and brought in Daryl Sydor to show everyone what it means to not be able to move.  Prized off-season recruit Sean Avery has two goals.  That's $4 mil for a guy just to be an ass.  Since Modano whined and bitched about having to play with this clown college after getting destroyed in Boston, he's gone in the tank.  Happy times in Big D!

That's not to say the Hawks can stroll to victory.  We imagine Khabby will get a second straight start after being the only Hawk to put 3 periods together Tuesday in Phoenix.  As mentioned above, the Hawks have struggled at American Airlines Center or Arena or Gathering Place or whatever it's called.  They did manage win last season, and this is the same Stars team they pretty much pimp-slapped on Halloween.  A 2-0-0 start would almost guarantee a successful trip, so do it.