Blago tried to sell a spot on the Senators top line too...

Share All sharing options for: Blago tried to sell a spot on the Senators top line too... 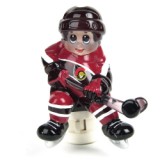 Yeah - I don't really know what that Sens thing is either - I think it's a nightlight.  Google image search gets you some weird and occasionally horrifying things.

This story should be getting a little familiar by now - similar to the Ducks.  The Sens can roll out one awesome line.  The Sens top line of Heatley, Alfredsson and Spezza is a dangerous grouping.  (I refuse to call them the Pizza Line - that's just fucking dumb).  Of the 168 points all the Sens players have - this line combines for 75 of them.  That's 45% of them... Filip Kuba is the only other Senator with double digit points (1 goal, 19 assists) and if you include him - these 4 players combine for 56% of all the Senators scoring.  You may also have guessed Kuba is a defensemen who gets the puck to the top line.  13 of his 19 points are assists to Spezza, Heatley and Alfredsson. Beyond that, that one line - there isn't much to be scared of from the Senators offensively. They're 27th in the NHL in Goals per Game.

Here's some good news though - Auld isn't getting the start today.  Martin Gerber will be between the pipes tonight after Gerber hasn't started in over a month after losing to the Hurricanes.  He hasn't been injured - he just hasn't played.  He could be rusty so again - hitting him with shots should be a priority for the Hawks.

The Hawks are also pulling the same move Phoenix did and going at the game with only one goalie.  Even though Crawford was sent back - Q has said he's still giving Khabby some more rest and Huet will get another start.  I'd imagine Khabby is available if absolutely needed though.

Obviously - the Hawks are also without VERSTEEG! for tonight's game after he lost his shit in the final second of the Coyotes game so that'll hurt the Hawks offense a bit - but he's been held without a point in 5 of his last 6 games so maybe a little rest is a good thing for the kid.  He also wins more points with a good quote about if he'd like to respond to Gretzky calling him out.  From the Trib:

"My dad [Roy] has this big wall full of Wayne Gretzky stuff," Versteeg said. "If I ever wanted to say something bad about Wayne Gretzky, he'd be the first guy here to give me a slap upside the head."

So this should be another game the Hawks can win if they come out flying like the did last game.  Don't sleep against the top line and get some pressure on a rusty goalie and they should come away with another 2 points.

Don't forget your Pick SPG entries - We're just 3 people behind the Avs now so there's still time to sign up and be competitive.  Expect an announcement on the prize for this year's winner soon.