And now we've got a race on our hands...

Share All sharing options for: And now we've got a race on our hands...

As PuckDaddy pointed out this morning - Our boy Patrick Kane got a huge boost in the all star voting over the weekend and has taken over 2nd place overall in the West for forwards.

As of right now, here are the standings: 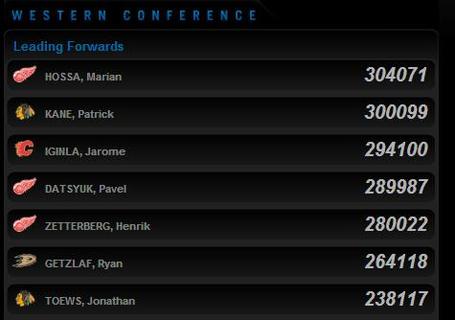 Right now, Kaner is just under 4,000 votes from taking over the top spot from Hossa, and we should do anything we can to make sure he gets there.  Is he the best forward in the league right now?  Maybe.. who cares?  Anyone who puts any real stock into All-Star Fan Votes is a moron.  But it would be fun as hell to see Kane take the top spot and give his mom something to talk about.

Expect regular updates for this - Lets also show Toews a little love while we're at it too.  We're no PensBlog - but we'll do what we can.

There are two ways to vote - online at Vote.NHL.Com or by texting either "Hawks" or "Kane" to 81812.  The problem with texting in your vote is there's some other joke named Boyd Kane who has played one game for the Flyers this year.  So you'll have to reply "1" everytime you text in your vote.  Texting "Hawks" is the easiest way to get around that though.. so do that instead

So lets show the world how Chicago does it - Vote early, Vote often