Share All sharing options for: Ain't It A Shame? To Be Shot Down In Flames: Hawks 3, Flames 2 (OT) 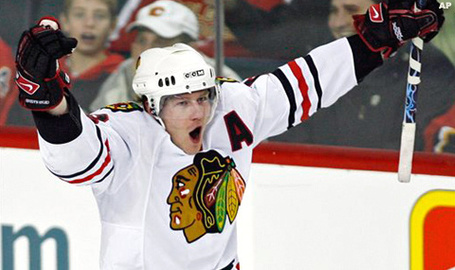 Sorry for stealing your goal song, Calgary.  But in all honesty, we like it way more than ours.

This trains keeps a rollin' all night long.  It's the heat, and the love, but the Hawks just won't tell us no.  Four out of four points in Alberta is nothing to shake a stick at, though I don't know who shakes sticks these days.  At least not in public.  The winner came when Captain Marvel undressed Dion Phaneuf, drawing a call but more importantly causing a drool-worthy rebound.  For some reason, all four Flames decided to ponder the meaning of life at this moment, leaving Duncan "I'm much better than Phaneuf" Keith to pound home the winner.

A word about Phaneuf here.  I know the Canadian media can't help but spray their shorts when talking about this guy, but it's the company line at this site that he's overrated.  You think our boy #2 would have gotten turnstiled like that in overtime?  Highly unlikely.  Phaneuf does all the things that are easy to notice.  He rushes up the ice, has a booming shot, and makes big hits.  But the overall game?  Don't buy it.  You can have him and his celebrity girlfriend.  We'll take Keith and his status at the d-man playing the best hockey on the blueline this side of Shea Webber.  Oh are the talks on his extension going to keep us up at night.

Mike Keenan also seemed to be asleep at the switch.  Here are the shift charts for tonight.  Notice Iginla was rarely on the ice without Keith and Biscuit, and Bolland's line as well.  Naturally, because that's what they do, they held Iggy to a quiet game.  When Iggy is quiet, it's not likely the Flames will score more than two.  They're beatable when that happens.  As we've promised, here's the Corsi for tonight as well.  You'll see just how even a contest this was.

How long did we wait for Rene Bourque to play a game like that in our colors?  Sometimes a change of scenery is what a player needs to wake up.  Looks like that's the case for Rene.

Apparently, Kaner has stolen Toews wrist shot.  You mean those hands and vision are now being complimented by a viscious wrister?  Kane's on pace for 40 goals by the way.

I'd also like to point out that this was Pat Foley's best game, though it was an easy game to call.  But no mistakes, no pauses.  Just the ol' Foley we remember, heightening our excitement at every point.

It's at this point that I think we need to take a step back and breathe.  There's been some national columnist, namely Mirtle and Puck Daddy, who have been labeling the Hawks as a Western Conference power.  They may be, but let's see that after this win streak is over.  There will be bumps coming, and we've seen hot Decembers before.  This team is good, thoroughly enjoyable to watch, and the future's bright.  How good are the Hawks?  I don't know.  Pretty damn good it looks.  We'll know more in January.

But let's enjoy the ride.  Talk to you tomorrow about Vancouver.