Share All sharing options for: The Glass Appetizer: Hawks at Scum Preview 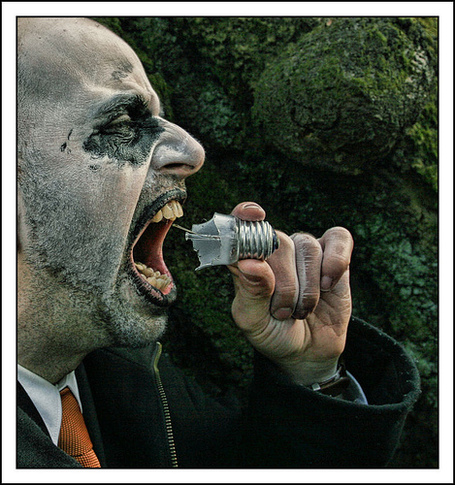 Yep, the glass-eating experience that is a game in Devil's Night City is upon us again.  This time, it's a two-fer.  An old school home-and-home, with the new school -- or should that be skool?-- twist of the second game being at The Confines.

It will come as no surprise when I say that there will come no better time for the West Side Hockey Club to put one over on our bitter rivals (I'm not sure we're their bitter rivals.  We'll have to be a threat longer for that).  The Hawks are playing the best hockey in the NHL right now, and by some distance.  The Wings have lost two straight, which usually means a crisis in Recession Town.  Osbad is hurt, Lindstrom's not likely to play tonight, and Mikael Samuelsson is sick, most likely from last night's tryst with a rough trick named Eric.  The two points are there.

All they have to do is put three periods together just like the first two periods they played last time that were at the Joe.  The Hawks were dominant, despite starting two goals down due to some poor luck.  They raced to a 4-2 lead, and it easily could have been more.  Much more.  It'll be interesting to see if Q wants Bolland on Datsyuk or the 2nd line dealing with Hossa.  Most likely it'll be the top one, and hopefully Hossa's deal with the devil won't come back to hurt us again.

Look for Wisniewski, and Campbell, to throw their weight around some tonight.  A disciplined game, which the Hawks have come up with in bunches, and not getting caught looking ahead to Thursday should see the Hawks through.  But is it ever that simple against Scum?  Another miserable three hours awaits.  Let's hope it ends with relief and satiscation.  And a perfect 10.