Don't Really Matter If She Don't Or If She Do, Just Trying To Make The Best of The St. Louis Blues: Hawks 2, Blues 1 (OT)

Share All sharing options for: Don't Really Matter If She Don't Or If She Do, Just Trying To Make The Best of The St. Louis Blues: Hawks 2, Blues 1 (OT) 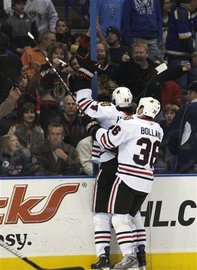 Remember when they used to play REM's "Superman" after Havlat scored?  Back when he was our only star?  Might be time to start that again, only to keep us from hearing the Fratellis.  The Perfect Beard once again popped up to carry the Hawks through.  A side story:  Last night I nearly got in a fight with some drunken yuppie dufus to defend Havlat.  I never thought I'd utter that sentence, but listening to that jackass say nothing but, "Havlat sucks," for a full period blew my fuse (speaking of which, the Wrigley bleachers element that invades the UC on Friday night games is worrisome, but I guess you can't stop it).

In all honesty, the Hawks scarecely deserve these two points.  They were outmuscled and outworked for most if not all of it.  Strange, but the Blues seem to be the only team that makes a concerted effort to really beef up the physical play against the Hawks, and to close down their ice at every opportunity.  The Hawks do not handle it well, they'd better figure out how soon enough.  This is what hockey will look like in April.  Shift charts and Corsi for you.

Another slightly worrisome angle is how Sharp and Kane have struggled recently.  Kane especially looks like he's throwing all of his toys out of the pram.  What really keeps me up is that they don't seem to be creating all that many chances.  I started this in The Indian, but my calls for Kontiola to get his call up are going to get slightly louder.  Both Kane and Sharp need a center.  It's weird to say that a team with a record as good as the Hawks needs some lineup changes, but well, I'm a weird guy.

But for tonight, 2 points is 2 points, of course of course.  Happy Sunday...