I'm all rested (kinda) and the only one in the office today so I've got the time to write up more of the experience of the Winter Classic.  This is a short intro because I'm going to include a lot of pictures.. All the pictures I took before the game came out pretty dark (shitty camera) and then during the game I didn't take many because it was harder to work a camera with gloves on...  The recap is much more about the experience than the game.. because the game itself sucked while the experience was unforgettable..

Please feel free to share your photos or experiences from the event in FanPosts or just in links via the comments section...

Sorry if it takes a while for the page to load.. hope you stick with it... enjoy 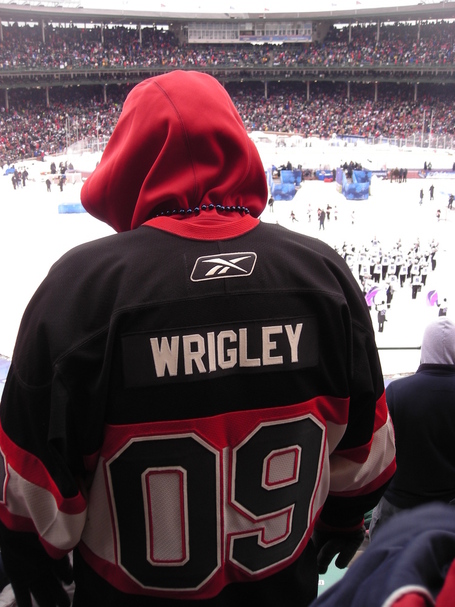 The atmoshpere outside the game was electric... you could tell everyone was excited and there was a ton of shit talking going on between fans though all of it was good natured, or as good natured as it can be between these two fan bases. Plenty of "Detroit Sucks" chants starting up randomly 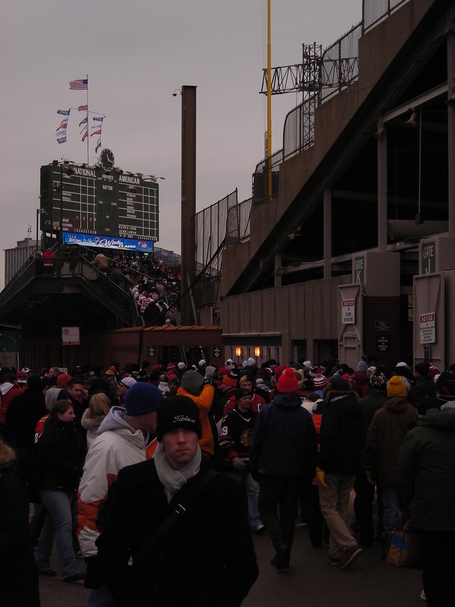 My favorite line came from seeing a guy walking down Sheffield waving a giant red wings fan.  A guy up on the concourse area of the bleachers sees him and yells "Hey - Shove that flag up your ass, fucker"... the girl walking with the flag waver remarks "that's like the 6th person who has said that to you". 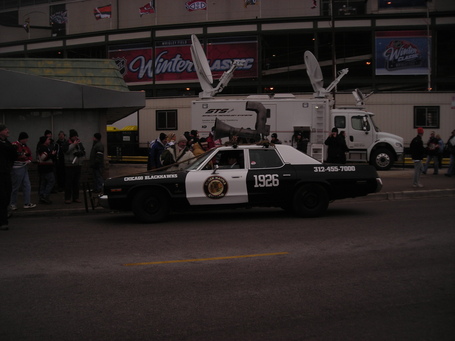 The line to get  into the bleachers had me a bit worried but it moved really quickly... I was also near the marching band that was in the bleachers which is always a nice touch.  I know it'd cost money in lost seats - but I don't know why more sporting events don't include bands like this... they always sound amazing and getting me way more excited than whatever shitty songs they play over the PA... Nice Daze sweater too.. 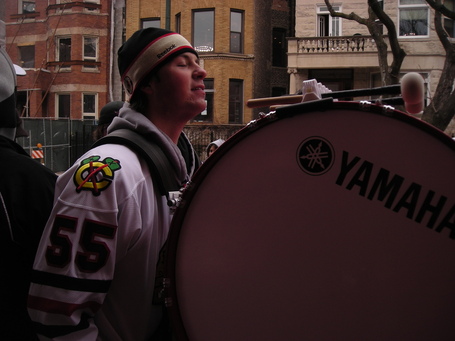 I was amazed by the view from my seats.  I was in dead center and pretty high up just under the scoreboard.  It was far from the ice, but you could still see almost the whole rink - I was expecting much worse and didn't think it'd be this good.  The scoreboard having that day's hockey games was a nice touch too.. 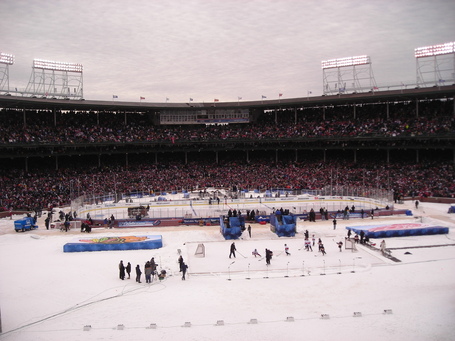 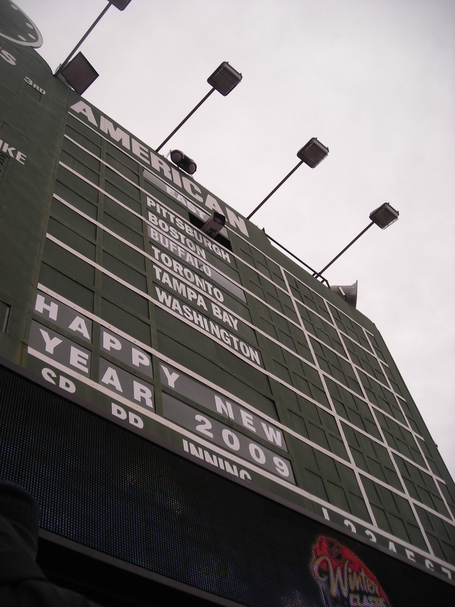 The bleachers seemed to be way oversold - there was no room to move around once everyone sat down.. Maybe it was just because we were all in winter gear unlike Cubs games in the summer - but it was more packed than I've ever seen a game there before.. I don't think anyone was complaining though because it helped keep us warm.  When they guy next to you got up to get a beer or take a piss.. you really felt a lot colder... 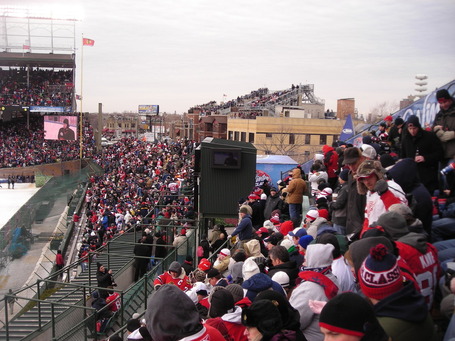 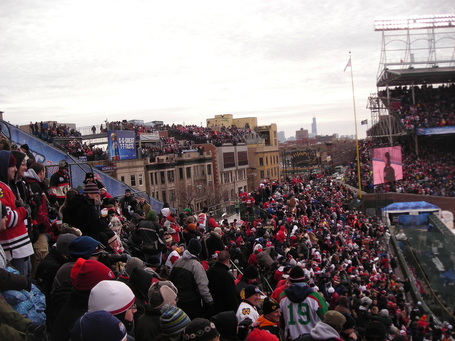 The entrances of both teams was a bit much... fog machines and fireworks?  I guess it did look pretty badass though 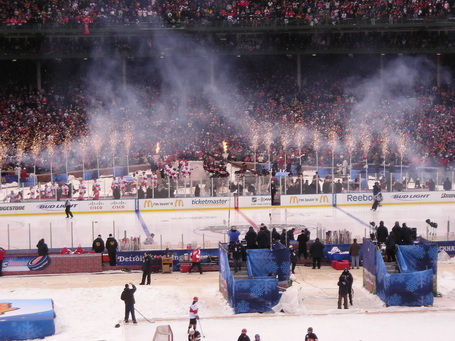 The Anthems were awesome.. for some reason a lot of people in my section were singing along to "O, Canada".. so I gladly joined in along with them... No pictures of our anthem though - but check out the youtube video to get a good feel for how loud it was in the bleachers.... You got chills.. you got pumped.. you got hoarse 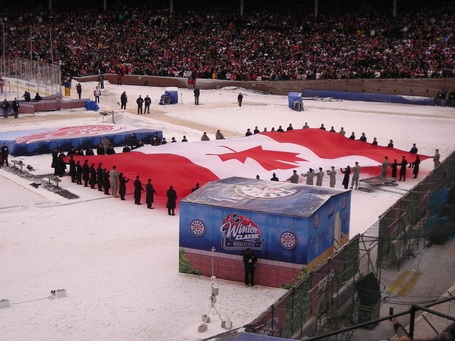 Right off the dropping of the puck.. the game looked like it was going to be intense.. Too bad the Hawks didn't keep up the pace they had in the opening minutes.  That hit on Cleary was amazing.  I was one of the few people who saw it from our section and was the only jackass who jumped up and yelled "HOWWEE LEE SHIT" 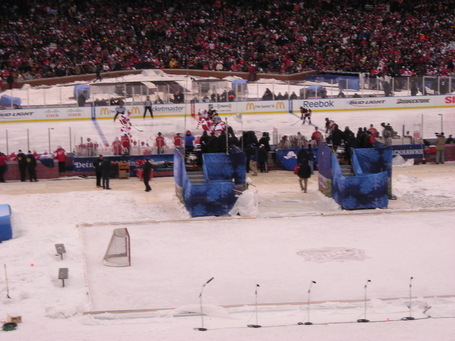 At the end of the game you see once again all the rich people leaving the game early while everyone in the cheaper seats stay til the bitter end... The sun started to come out too which made for some nice pictures.. 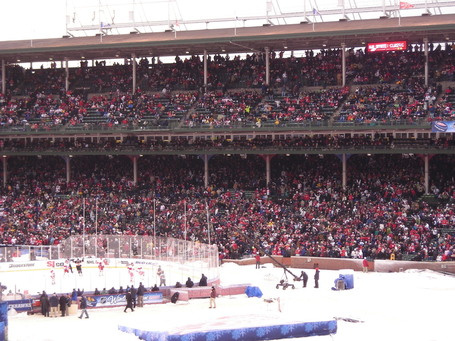 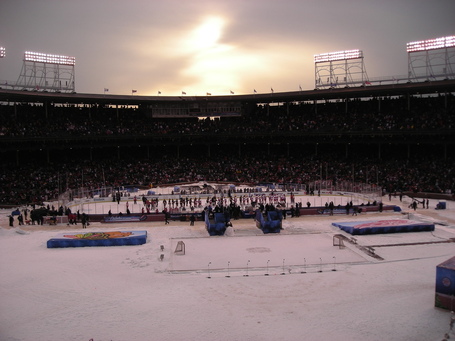 The post game handshakes were an interesting touch - We all fully expect these teams to meet in the playoffs.  Maybe not this year, but soon.  We could be seeing the birth of a renewed rivalry, but the Hawks are going to need to play a lot better than they did yesterday to get it off the ground.