I saw this over on Puck Daddy today - The Detroit Free Press is calling on their readers to do what Detroit fans do best... whine.

If you've had the displeasure of talking with any Red Wings fans lately, they've probably complained about the lack of Wings starting in the All-Star Game.  Rather than chalk it up to the fact the Blackhawks went out of their way to encourage fan voting and other schumcks encouraged you to stuff the box, Wings fans actually feel slighted by the lack of starters for this utterly meaningless game...

And now The Detroit Free Press is asking their readers to come up with a "snarky" comment to fill into this cartoon expressing their displeasure. 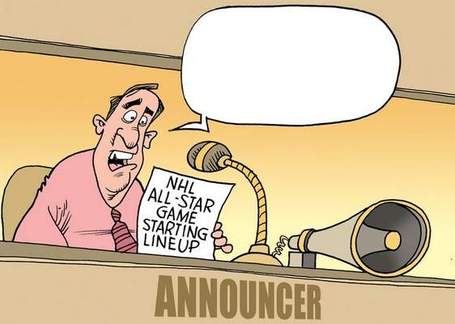 The problem is though, Red Wings fans lack any sense of humor.  Check the comments on this page... They've thought "Dead Wings" was creative... and complained about the commonplace "Detroit sucks" chant when the two teams play in our fair city. Lets see how they do with this task..

"Welcome fans, as you may be aware, the new 'Bettman' rule for the All-Star game forbids Stanely Cup winners from being selected the following year. This rule is only in effect at the discretion of Gary Bettman, hence the title, the 'Bettman' rule."
01/05/2009 4:23:13 p.m. EDT

This one could have used some further explanation...

I thought the biggest fear was being paired up with Eddie-O?

Womp Womp... fill in your own suggestions in the comments...