Two quick bits of information here.   First - about a "viewing party" for tomorrow's season opener.  Both McClure and I will already be downtown so we're both going to catch the game at Monks, which is at Lake and Wells.  It looks like this: 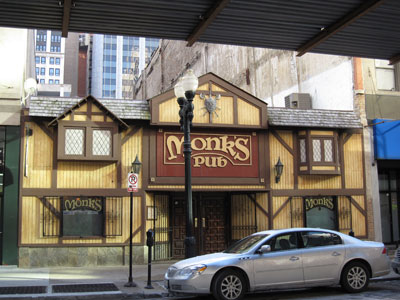 We're not having anything formal, we'll just be showing up to catch the game.  Monk's opens at 10:00, has HD, food, beer and free peanuts.  Sounds good to me.  Feel free to stop by during your lunch break.  Come get drunk, watch the Hawks, then go heckle Daley about the Olympics afterwards... or not.

Secondly, I just talked to Gary, who runs the Pick SPG website, and got the Blackhawks signed up for all of us again this year.  For those of you who are new to the site, Pick SPG is a contest/game we ran last year.  It's a pretty basic idea - every game, you log into the site and pick which Blackhawk will be the first to score a goal, take a penalty and register a shot for each period (including OT).  Every time you pick the right player, you get a point.  The site keeps track of the totals.  Last season, the winner won this: 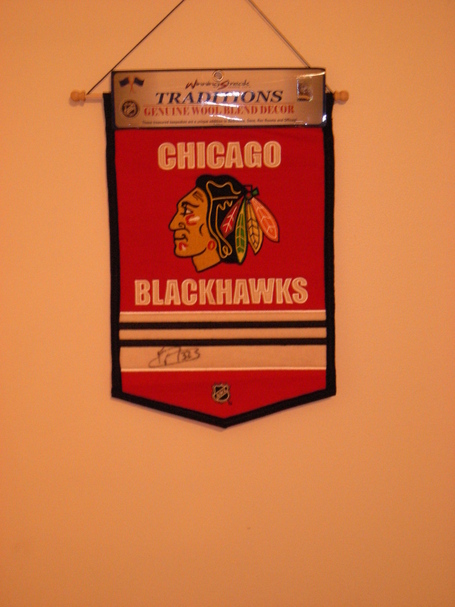 A Blackhawks banner autographed by Kris Versteeg.  I'm sure we'll have a prize again this year but I don't know what it will be... probably something awesome.  The game is totally free to play.  A special note though - even if you played last year, you'll have to re-register this year.  Any other questions, let me know in the comments.

The puck drops in the first game of the NHL season in just under an hour... fuck. yes.