Share All sharing options for: As You Were - Blackhawks 4, Oilers 3

Well, that's a bit more like it. Tonight, as opposed to Monday, the Blackhawks decided that they were actually going to give a shit to start the first period. Funny result when that happens, isn't it? On the second shift of the game, Patrick Sharp scored on a nifty passing play from linemates Jonathan Toews and Andrew Ladd, kept together after the third period of Monday's game. While he was not credited with one on the stat sheet, an assist should go to defenseman Niklas Hjalmarsson who made an excellent play to keep the puck in the offensive zone and shuffle it to Ladd. But we're not done with Hammer just yet.

Between Hawks tallies, the Sopel/Barker experience queefed out another scoring chance for the opposition, with Andrew Cogliano scoring on a 2-on-1 as a result of a Sopel miscue, one neither he nor Barker got back in time to recitify. Starter Antti Niemi could hardly be blamed for that play, which momentarily deflated the building, as it was the Oilers first shot on net.

Later in the period, Super Nintendo Hjalmers exhibited some of his much ballyhooed hockey acumen while skating backwards along the blue line to get a shot from the middle of the ice through traffic, which resulted in Jack Skille potting his first of the year banging home the rebound. From the outset, the Hawks were heavily peppering returning would-be-savior Nikolai Khabibulin from all angles, and Nik was perfectly content to leave many a juicy rebound for the Hawks to pounce on. Glad to see Skille notch one, hopefully the Hawks will put another ten bucks on his iPass as a bonus.

Into the second, the Hawks continued their territorial dominance, as Niemi was rarely tested, and the Hawks increased the lead to 3-1 on a marker from Kris Versteeg, who banged home a centering feed from a free-wheeling Brian Campbell, who was streaking behind the Edmonton net on a delayed penalty call. It should be noted, again, that Niklas Hjalmarsson made the outlet pass to Patrick Sharp, which is what got the whole play started. Sharp would then later be awarded a penalty shot after being taken down on a partial breakaway, but was stoned in his attempt by Khabibulin. Not a surprising result, considering the shootout isn't really Sharp's forte, and Khabibulin's seen the limited moves Sharp has in that situation for the last four years. In an interview with Judd Sirott during the postgame, Sharp hinted that there may have been a playful exchange between former teammates after the shot.

Edmonton made it more interesting than it really should have been in the third, with a pair of somewhat flukey goals. The first a bad bounce off a skate in front on a centering feed from gelatinous cube Dustin Penner, which was initially ruled no-goal, but was overturned on review. Cam Barker would make amends for the earlier goal against with a power play bomb from the blue line, with Patrick Sharp providing the screen in front of Nik. After a couple of questionable penalty calls on Brian Campbell and Dave Bolland, the Hawks yielded a 5-on-3 tally (with an empty net) to Denis Grebeshkov off of a scrum in front of Niemi that realistically should have been blown dead about a half second before the puck squirted to Grebeshkov. The final horn would sound before Edmonton could mount any further of a comeback, with the Men of Four Feathers emerging victorious for the first time in regulation at the UC.

Stray Observations
Player of The Game
While I did throw a lot of love toward Hammer above, and it was, in the opinion of this observer, an error to not have him as one of the official three stars of the game, the honor tonight has to go to The Shooter, Patrick Sharp. Who continued his scoring streak, and used his speed to create opportunities all night long. 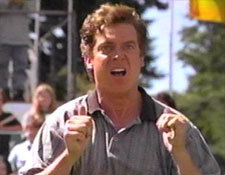