Apologies for the delay, but Saturday night revelry and Liverpool's glorious victory over United this morning kept me from my duties.  Anyway, I'm disappointed that I will turn up to the UC twice more this season to watch the Nashville Predators.  There's just nothing there.  And coach Barry Trotz knows it, which is why he had them trapping and clogging pretty much all night.  The Hawks never really got out of 2nd gear except for a couple flashes, but it was more than enough to see of the Preds.

-Kudos to the Hawks fans, who started the night with Bronx cheers for every save, but quickly got behind Huet when it was clear he was on his game.  Also good to see that Huet was out and challenging shots as often as he could, which is a sign of confidence.  Rebounds were occasionally a little dodgy, but one step at a time.

-The fourth line was better, and when people return to health I would have no problem with Dowell replacing Fraser or Kopecky in the regular lineup.  He does what he can, that's all you ask.

-If Hjalmarsson keeps laying out people like THAT, he'll officially be a thing.

-  I get the impression if a few more passes from Kane bounce off Buff's stick -- or Bolland's -- Kane's going to beat them about the face with his.

-The lines made no sense last night.  Why was Madden between Kane and Buff for a portion of the game?  Ebbett should have just slotted in where Toews would have been, which he eventually did, instead of screwing up the whole roster.

-How Brent Sopel has earned the right to play 23 minutes and Jordan Hendry only 10 is anyone's guess.  If I ever see Sopel try and fire on a one-timer again I think I might have a stroke.

-Seabrook needs to get healthy soon, and Duncan Keith's minutes are a worry.  28 last night, and he's averaging just shy of 27 for the season.  We already watched him wear down last season.

Anyway, all of that said, a win is a win, and we get another look at the Preds Thursday. 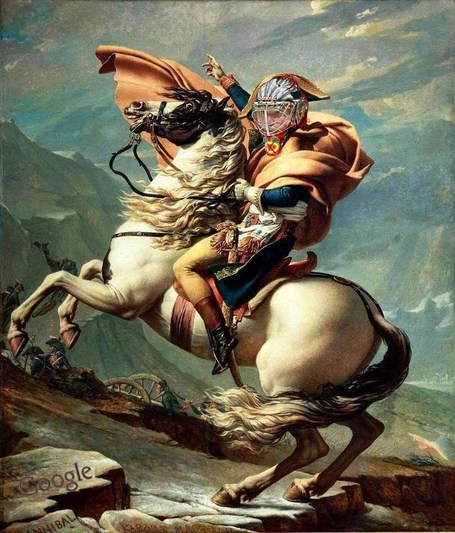 We've been forgetting to run this recently.  Anyway, you don't give up a goal, you get this honor.  Pretty simple .  Way to go, Cris.