Sam asked for 3 out of the 4 points from the Blackhawks and they didn't disappoint.  Trying to recap everyone that looked good in this game would take far too long.  I can't think of any player that looked bad today.  Even Sopel was pinching at the right time, keeping the puck in Cats zone and perhaps most importantly - drawing the first penalty of the game when Ville Koistinen foolishly takes him out behind the play.

Speaking of the power play - after putting up nothing of note in the first game, we saw 3 goals with the advantage.  Brian Campbell's blast in the first period put the Hawks on the board and kicked off a great game from Soupy.  He only registered two shots on the box score but he had several other chances where he looked solid, even defensively.

John Madden is going to quickly erase Sammi Pahlsson from our collective memories.  Madden (who is in desperate need of a nickname) brought the physical game, leading the squad with 5 hits.  The Ladd-Madd-Brouw line is going to infuriate other teams if they can play like this every game.  Brouwer may never be able to find a scoring touch but teams aren't going to be able to sleep defensively and aren't going to have much luck offensively either.

OK - so now we get to the biggest issue.  Goalies.  Sure, Huet didn't have a great game yesterday.  Going high glove side is a problem.  Also, yes Antti Niemi had a solid game today.  And without missing a beat, we're seeing not only people on this site but even Chris Boden in the Comcast studio questioning Huet's role as the starter.

Here's the problem though - just about any NHL caliber goalie would have looked like an all-star in this game, yes, even Huet.  Niemi faced only 3 shots in the first, 8 in the second and 12 when the Cats got desperate in the third.  Few, if any, of those shots were high quality.  The shutout has as much to do with the backchecking and solid positioning as it does with Niemi's play.  While you have to love his solid stickwork and confidence when the Cats were pressuring him, I'm not ready to crown him the solution to our "problem".  Right now, he's looking like a solid back-up.  Nothing more.  Be patient people.

Wrapping up - a great team effort.

It's not often that the Hawks will blank another team and you won't see the goalie up here as the player of the game... but Niemi hardly stood on his head to win this game.  Once I've ruled him out though - it's pretty hard to pick someone else as many players had a solid game.  Kane had two points and another pretty goal, Sharp scores again and causes McClure to get that "special feeling" again, Madden becomes a fan favorite and Campbell could be quieting a lot of his critics but we'll go another route. 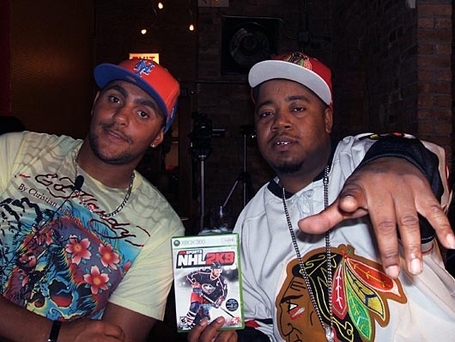 No, not Twista.  We're going with Dustin Byfuglien who in case you didn't know, now has 3 points in two games and is on-pace for 82 goals.  He was crucial in screening Vokoun on Campbell's goal and had 3 hits.  Of course we've seen flashes from him before but if this is real - it's going to be a great year.