Share All sharing options for: Well, That Was Relatively Quick - Hawks 3, Lanche 2 (Shootout)

At least it wasn't eight or nine rounds deep this time.

Being at the schedule makers' mercy, in an Olympic year, the Hawks met the Avalanche for the third meeting of four total in this young season, and the pace in the first period was quite brisk. The teams traded chances in the early going of the first, and Colin Fraser and Matt Hendricks renewed acquaintances with a tussle, and Colorado opened the scoring on a goal Huet would like to have back. Kyle Cumiskey picked up a rebound off the glass behind the left of Huet, and threw it at the net before Cris was back in position. It was a bad goal, but, again, we've seen worse. Aside from that Huet was rather sharp in the first, aggressively taking away angles and the bottom of the net. His counterpart Craig Anderson was peppered as well, with Patrick Kane finally solving him with a top shelf short side snap shot to tie things up. The Hawks allowed an uncharacteristic 12 shots during the first, while putting 12 shots on goal themselves.

The second was all Colorado, as the Hawks again seemed to have trouble entering the offensive zone and sustaining pressure. Wojtek Wolski scored on a broken play, again to the left of Huet after a giveaway by Andrew Ladd in the neutral zone led to a chance that had the puck pop up in the air, where Cris lost it, and then then again could not get back in position in time to stop Wolski's bid.

Conversely, the third period was all Hawks, with shots throwing rubber at Anderson at every opportunity, and finally getting their forecheck in gear. Cam Barker tied things up on a nice individual effort rushing the puck up ice from his own zone, capped off by beating Anderson again high and to the short side. From there, the Avalanche seemed content to try to escape with the point, but the Hawks kept their foot on the gas, outshooting Colorado 15-3 in the third. It should be noted, however, that two Avalanche shots drew iron during the third, but that won't show up on the scoresheet. Regulation ended tied (AGAIN), and the teams went to overtime (AGAIN).

The attack didn't cease there, as the Hawks put four shots on Anderson in the extra frame, and even had a competent, abbreviated 4-on-3 power-play to end regulation. But it was not to be. So let it be written, so let it be done- these two teams are seemingly forever destined to settle their difference in the skills competition.

Huet was down and out to lead-off man Wolski, but again, he hit the post with his Forsberg-esque half-spin backhand. Toews answered with his now trademark rifling of a shot through the goalie's five-hole. Marek Svatos converted a pretty backhand high and to Huet's stick side to knot the shoot out at 1-1. The last attempt fell to Patrick Sharp, who has had his difficulties in these situations, but made no mistake in dipping his shoulder left, then cutting back right to go high over Anderson's glove for the winner. Hawks 3, Avs 2. 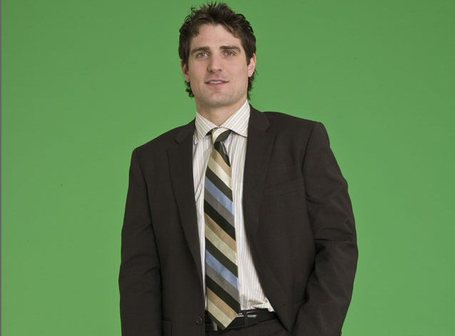 Tonight's honor goes to Patrick Sharp, who was a factor on all 200 feet of the ice tonight backchecking and contributing offensively assisting on Kane's goal and scoring the shootout clincher.