We've heard all of the rumors going around for months now that the Blackhawks have been working on trades, specifically with the Leafs.  Well today I think we finally got the hint we've been waiting for from the team on what that trade will be.  Check out this image found on the Blackhawks site this morning: 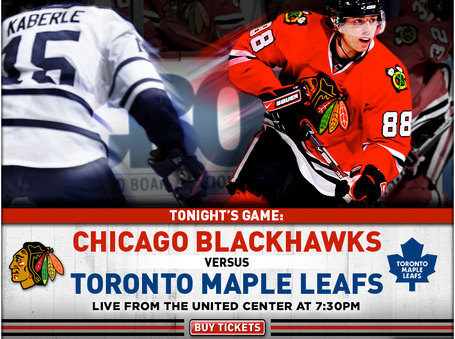 The image is clearly a photoshop since the last time the Blackhawks played the Leafs at home was Dec. 22nd, 2006, well before Versteeg or Kane were playing for the club.  This can only mean the Blackhawks are planning to trade Tomas Kaberle for Patrick Kane (he's lazy) and Kris Versteeg (because seriously.. Fergie?).  I'd expect the trade to be announced in the next few hours so all parties involved can get their new sweaters in time for tonight's game.  If Stan Bowman is really good - we'll also get the Leafs to throw in Vesa Toskala to solve the major problem in the net.
/hockeybuzz