Mark It Eight, Dude: Blackhawks Crush Sharks 7-2 for Their Eighth Win in a Row

Share All sharing options for: Mark It Eight, Dude: Blackhawks Crush Sharks 7-2 for Their Eighth Win in a Row

In the history of Second City Hockey, we've probably had some pretty terrible game recaps - this might be one of them.  McClure and Fels are obviously still over at the Whirlaway plowing down drinks and eating whatever delicious food Maria has made for the horde that made it out to the bar.

Meanwhile, I got back to my parent's home just in time for the second period to watch the Sharks game go absolutely down the toilet.  Of course, I had to watch the game on a shitty internet connection and Yahoo's feed kept fucking up so I don't have any great insight as to how the game actually went - as if I ever do anyway though, eh?  I've had several Yuengling's though - so I'm good to go.

Since the feeds out here sucked, all I've really got to go on are the stats and the game thread... and by the way the game thread had over 700 comments - I'm very fucking proud.

There are two things that obviously stand out - the Hawks scoring 3 short handed goals and Hossa netting two goals in his return to the ice... Honestly - I'm not sure which is more impressive.  Short handed goals are always a mix of great play and a bit of luck.  Due to the poor feed, I can't remember who but I remember seeing Sharks D-men falling down allowing at least one of the shorties.  It was almost the bizzaro version of the game against the Flames where the Hawks scored their goals on the power play.  This time they got them with a man feeling shame in the box - word is Brouwer, Sharp and Hossa all grew goatees too... Regardless - awesome.  Hossa immediately making his presence felt, that could be even sweeter.  This team is scary good at the moment, hopefully it's this fun for a lot longer.

Hossa ended the night with 2 goals on 4 shots in 16:35 minutes of ice time - Quenneville obviously didn't have any problems pushing Panda (alliteration!) tonight, only Patrick Sharp and Jonathan Toews had more ice time among the forwards.

On the Sharks side of things - it didn't look too good.  Danny Boyle, Dany Heatley, and Joe Thornton were all -4 tonight.  Patrick Marleau had a team leading 4 shots (one less than John Madden and a few other Hawks) on goal but was still -3.  Speaking of shots on goal - The Sharks only managed 11 through the first period, though they did more than double that total in the third once the Hawks foot was clearly off the gas and settled into cruise control.

Scoring a touchdown (the extra point is good!) on the road is good - doing it against a team that hadn't lost in regulation at home, that's better.  If you read the Power Rankings post I had yesterday, you saw that this was had the potential to be a statement game.  These are two of the best teams in the NHL - and the Blackhawks absolutely dominated the Sharks.  Happy Fucking Holidays.

Don't know how the other two are going to be feeling tomorrow but if they're not too annihilated they may have a few more thoughts before settling into a traditional American food coma.  If not, let this be the Second City Hockey message to all of you saying we're very thankful to have all of you as readers and we hope you have a great day.  Enjoy.

Once again, this could have gone to a lot of players.  Troy Brouwer had a goal, an assist and two hits.  Duncan Keith had another 3 assist game. Both Patrick Sharp and Brent Seabrook had goal and assist games - Biscuit also had 5 hits.  Cristobal Huet had another great game - he came out with only a .917 SV% but deserved better since the Hawks got sloppy in the waning moments.  I think we've got to go with the new guy though. 2 goals on 4 shots in just over 16:30 minutes TOI. 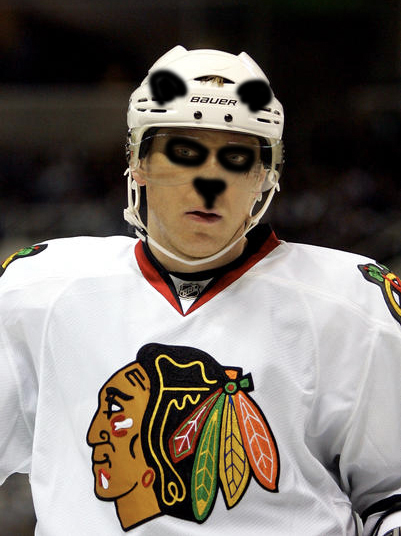 Thanks again to GMH for the image - which is slightly terrifying but awesome at the same time.