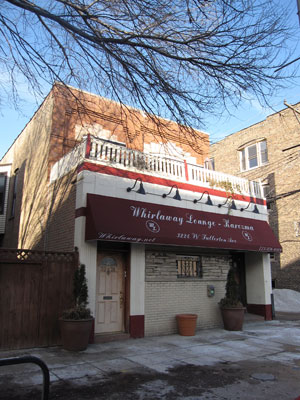 Because it's been nearly a week since the Blackhawks had a game, I know everyone's overly anxious to watch them play again. Additionally, because it's a Thursday night, it's the start of the weekend, if we're all being totally honest with ourselves. So given those two facts, we, the triumvirate of derelicts that run Second City Hockey, would like to cordially invite you to join us at the Whirlaway Lounge in Logan Square to view Thursday night's game against Phoenix Coyotes/Hamilton Crackberries. Anyone who made it out last year to the Whirlaway during the playoff run can tell you what an exceptional establishment friends of the blog Sergio and Maria run, and bless them for continually tolerating three ne'er-do-wells such as us. The proprietors of HockeeNight, Blackhawk Up and Indian Head Nation will be in attendance along with their constituencies as well, so don't make us look bad by having a piss poor following in comparison- we do enough of that on our own already. A good time is guaranteed to be had by all.

The Whirlaway Lounge is located at 3224 W. Fullerton Ave. in Logan Square, on the northwest corner of Kedzie and Fullerton avenues, and the game starts at 8:00PM. Hope to see all of your gorgeous faces there. Please forgive the late notice of this as well, as we were waiting to make sure that there wouldn't be a conflict with game 7 of the World Series Thursday night.