Share All sharing options for: To The Five Boroughs - Hawks 2, Rangers 1 (OT)

If you can find anything to complain about from the Hawks from this game...you're wrong. The fact of the matter is, for nearly 64 minutes, the Hawks dominated this game, and the only thing that kept the Rangers in it was Henrik Lundqvist. The one sequence that the Hawks gave Marian Gaborik any room to work with in the first he found an open Chris Higgins who beat Cristobal Huet from the left circle with a perfect water bottle wrister. Other than that, however, the Rangers didn't get  a sniff, as evidenced by the 3 shots COMBINED in the third and OT, and totaled 18 for the evening.

In the offensive zone, the Hawks mauled the rangers for a total of 41 shots for the night, and the game would have been out of hand early if not for Lundqvist's heroics. Every line for the Hawks produced offense, and it finally took four Hawks jamming away at King Henrik with 6 minutes left, and on a power play, to finally prod one past him to equal the score, and consequently force the overtime.

Once in OT, the Hawks kept the pressure on, and then came one of the most ridiculous things I've seen at the UC in a long time. Dustin Byfuglien picked up a loose puck at the top of his own rings and led a one-man rush down the ice and slid the puck past Lundqvist for the game winner. Buff has regularly been a whipping boy of this blog, and this play is part of the reason why. Seeing this, we all know he has it in him, and yet he is still quite often a passenger on whatever line he happens to be playing with. It's confounding, but even still, it resulted in my maniacal victorious laughter at the end of the night, so all's well that ends well. Hawks win 2-1. 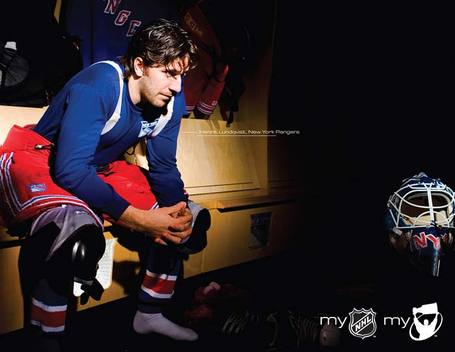 In spite of Buff's goal, and even though it ended up being a losing effort, there is no denying that King Henrik had the best game of anyone on the ice tonight.