Wanna hear one of my favorite jokes, as originally told to me by a college roommate?

"What would you call Chicago if it sucked?"

That pretty much sums up my sentiment regarding the Hawks' division rivals after watching last night's game. The Hawks were all over the Blues from the get-go. Troy Brouwer finally dented the twine after one-timing a pass off of a cycle from Jonathan Toews and Patrick Kane from the top of the left circle. Shortly thereafter Brian Campbell scored his first goal on North American soil on the power play, blasting a slapshot far-side past St. Louis goaltender Ty Conklin.

Even though during the second period the Blues mounted at least a half-assed attempt to get back into the game forcing Cristobal Huet to make some timely saves, the Hawks managed to extend the lead fresh after killing a penalty when the Unholy Alliance that is Kane-Toews-Hossa got thrown out there once the penalty had been killed. Hossa broke into the zone, and once again a low cycle ensued which somehow left Hossa alone between the hash marks to receive a pass from Toews which he buried.

From there on out, things got quite chippy, as cuntrags Barrett Jackman, BJ Crombeen, and Cam Janssens decided it was time to exact their pound of flesh since they clearly couldn't skate with the Hawks. Credit the Hawks for standing up for one another, as once again Kris Versteeg took on a much larger opponent in Jackman during one of the many extended sessions of slap-dick in the third. While it may earn him much respect in the dressing room, personally, I'd rather not have VERSTEEG!'s skillful hands be pounded to cinders on someone's face, or have his own face re-arranged should he be taking on anyone other than Kyle Turris. Cristobal Huet even nearly got into the act, as he skated out to the blue line and subtly motioned to Ty Conklin during a 5-on-5 dogpile that was the result of Janssens getting in Huet's grill. While I don't need fights to enjoy a game, a goalie battle would have certainly endeared Huet to the fans, and it would be one more thing I could check off my list of things I've seen live. Oh yeah, Hawks win again in shutout fashion. 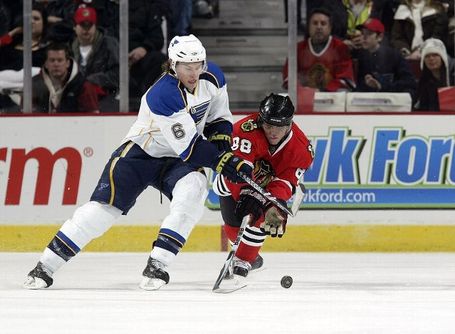 With the tinted visor he becomes Darth Kaner, harnessing the power of the Dark Side to the tune of three assists.