Well that's the way these games are supposed to go. In spite of Nashville's hot streak, and their uncanny ability to give the Hawks fits, the Blackhawks were able to win convincingly 4-1 in Music City.

Though the Predators predictably came out trapping, the Hawks actually decided they were going to work as hard as the Preds tonight, and fought through it, generating back to back penalties midway through the first. The Hawks converted on the latter of the two when Dustin Byfuglien fired a wrister from the blue line through a perfect Troy Brouwer screen of Pekka Rinne. While I'm glad the Hawks converted on the power play and scored the game's opening goal, I know that this tally will only give positive reinforcement to the erroneous assumption that Buff is a competent power play point man.

After outshooting the Preds 15-8 in the first, perennial Hawks killer Martin Erat scored on a breakaway after intercepting a blueline pass from Duncan Keith to Brent Seabrook. Initially, it appeared that the the "intent to blow" (for lack of a better phrase) would again rear its head, but being that I hate that rule, Toronto ruled correctly, and gave the goal to Erat after slipping it through Cristobal Huet's legs as he slid into the net. Two shifts later, Patrick Kane converted on a beautifully executed 2-on-1 with Brouwer that was sprung at the Hawks' blue line by Toews. Shea Weber played the pass, and so did Rinne who was deep in his net. Kane looked off Rinne, and fired a water bottle shot short side, giving the Hawks the lead. About a minute later, Andrew Ladd potted his first goal in fuck knows how long on a scramble in front of the net. And in the waning minutes of the period, Patrick Sharp roofed a rebound off a Tomas Kopecky redirect of a Duncan Keith shot on a play that was created by Kane stickhandling toward the slot and drawing attention from defenders. The third period was purely academic, Hawks win 4-1. 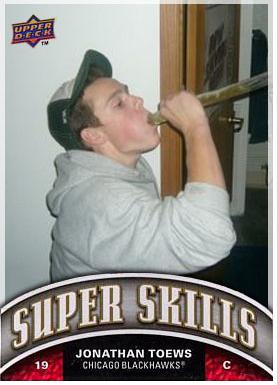 O Captain, my captain. Toews assisted on both Buff's and Kane's goals, and was a menace along the boards all night long. So much so, that it even caused Pat Foley to utter the name of my favorite Hawks drinking game verbatim: "...and Toews comes out with the puck". Nineteen guesses as to how that drinking game is played.