I'm a streetwalking (panther) with a heart full of napalm.

Share All sharing options for: I'm a streetwalking (panther) with a heart full of napalm.

Baring a Stanley Cup Final between Florida and Chicago (highly unlikely) - this will be the last time these two teams meet before kicking off next year's season in some country that Bettman just made up called Fin-Land.  Look - he even made a logo and everything 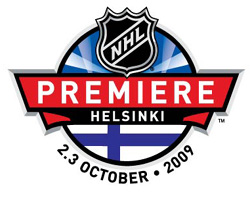 By the way.. my birthday is October.  So if all want to save up and buy me a ticket over there to watch the games - I'll accept it.

A couple of years ago this would have been one of the worst possible games to send over the ocean to showcase the NHL.  Now... it could be actually a pretty good one.  Given my hatred for just about all teams located in the south (and a special hatred for all things Florida) - I happen to actually be pretty excited for this game.

In case you don't pay attention to the East (I only did really once I started writing about hockey a lot) - the Panthers are actually a pretty solid team.  They're 7th overall but just like the West there's a logjam of teams with a lot of points.  The Panthers are only 3 points away from catching the Flyers for the 4th overall spot.

They aren't an offensive dynamo team (16th overall in goals for) - but their blue liners and goalies are always exciting (6th overall in goals against).  This team was supposed to be trading off players like Bouwmeester or Horton (who would look great in a Hawks sweater) but you can bet there's no way either of those guys are going anywhere now.  Both goalies for the Panthers have been having a good year and have SV% over .925 though you can expect Vokoun in the net tonight.

The Hawks PK units could get a boost as Florida only scores on 15.7% of their chances (26th overall).  While the power play units will have a tougher time, especially since Florida takes the 4th least amount of penalties per game.

The Panthers are also an incredibly hot team right now, some might say "red-hot" even.  Since the new year, they are 13-4-3 - 5 of those wins though have come from the Leafs or Islanders - there's nothing like a shitty team to pad your stats.  This is still not a team the Hawks can go down two goals and expect to easily come back against.  They'll have to play a full game.

Check out our SB Brother Blog - Litterbox Cats for a quick preview from their side and a sweet picture of Q in an Whalers uniform.