Share All sharing options for: Sometimes the game just don't go your way

Sometimes.. there's just going to be games like this.  The Hawks dominated just about every aspect of this game.  They outshot, out hit and out worked the Wild all over the ice tonight.  Hell, they even won more of the faceoff battles.

But sometimes a goalie is just too good for one night.  Tonight was the highlight of Josh Harding's career.  He'd played in 13 games up til tonight and had won only one game.  But tonight he turned away 44 shots from the Hawks that included some amazing highlight reel saves.  So it goes.

Going 0-8 including blanking on a 5 on 3 opportunity doesn't help anything either.  It's not exactly like the power plays were all crap.. some of them actually looked quite good. The Hawks simply weren't able to get any quality chances and when they did.. Harding was there.  Coming into the game the Wild had the top rated penalty killing unit - safe to say we found out why tonight.

Things looked good halfway thru the second as Walker got a puck up the ice where Daydream Nation teamed up with Martylark to net the game's first goal.  How terrifying must it be for a goalie and a d-man to realize there's an odd man break coming their way and it's those three.  I think Harding pooped his pads a little bit.

Alas it was not meant to be and the refs made sure of it.  On a power play Dan Fritsche parked himself in front of the net and used some pretty great hand-eye coordination to bay a puck down to the ice and through Huet's legs.  It didn't seem to matter that the Fritsche played a puck above the crossbar though.  Again - so it goes.

The third period goal was a weak effort from Huet as Peter Olvecky was able to throw one right between his legs and from then on out the game got pretty boring.  Not many chances and the Hawks looked tired from playing a game in Dallas yesterday.

If the Hawks play this way - they'll win most games.  The power play was disappointing and needs some work (particularly the 5 on 3) but if not for Harding's outstanding effort the Hawks easily could have had this one.  Check out the CORSI and Shift Charts for further proof.  Only Troy Brouwer ended the night with a negative CORSI rating.. compare that with the Wild where only Clutterbuck and Olvecky ended the night with a positive rating.  Goes to show you that sometimes the all the numbers can go your way... except the ones that matter most.

I have to say though - tonight ended a damn epic streak.  Until tonight, every game that I had worn my new Toews sweater (bought from the Chinese website because I'm a total pinko) the Hawks had come away with 2 points (6-0-0 record).  Sadly that streak ended tonight.  I'm going to blame it on me not wearing a Hawks shirt underneath the sweater though, because as we all know - our wardrobe choices impact our favorite teams in unknown amazing ways.  I'll make sure it doesn't happen again.

Hopefully the Wild fail to make the playoffs because we surely don't want to face them.  Don't expect this often - but we're going to have to give the Second City Player of the Game to an opponent.  Great game Harding - I hope to never see you again. 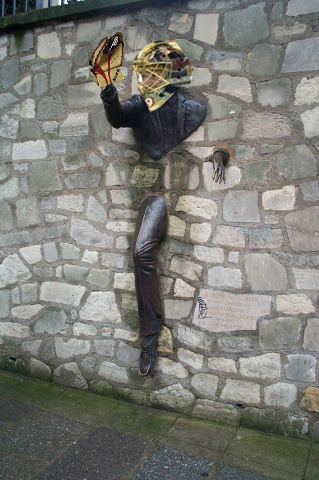