Curious Case of the High Stick

Share All sharing options for: Curious Case of the High Stick

No.. not the 5 different high sticking penalties that were called last night - that was just a bit of sloppy hockey from some tired players.  I'm talking about Dan Fritsche's alleged high stick that resulted in the Wild getting a goal to tie up the game in the second period.

The guys over at Fifth Feather said this:

Judd Sirott had a sound bite from NHL war room veteran Mike Murphy who indicated there was no conclusive evidence it was a high stick saying one replay showed the tip was legit and the other may have been a high stick but the camera was at a bad angle.  Alas, that wasn’t the last break that wouldn’t go the ‘Hawks way.

Now I haven't actually heard Sirott's sound bite but if it's true one has to wonder - why the hell don't they have a better camera angle?  From the angle that was shown on Comcast - it seemed pretty clear that Fritsche's stick was well above the crossbar when it made contact with the puck.  Even the Wild fan who joined us for the Game Thread thought we got the shaft on that one.

The angle that we all saw was the camera directly behind the net which is positioned a little above the crossbar which obviously makes it harder to determine the right angles of the play.  So why not put cameras dead even with the cross bars on each side of the rink?

The posts on an NHL goal are 4 feet high but the boards on the ice are anywhere between 40"-48" so the max they can be is 4 feet as well (though the NHL says 42" is "ideal"). That would leave plenty of room both behind the net and along the sides of the ice to put cameras to better capture what happens.

If the NHL insists on having a war room in Toronto looking over everything (and I still don't know if that would be an awesome job or a horrible one) then why don't they do everything they can to ensure they have the best possible angles to view the action? 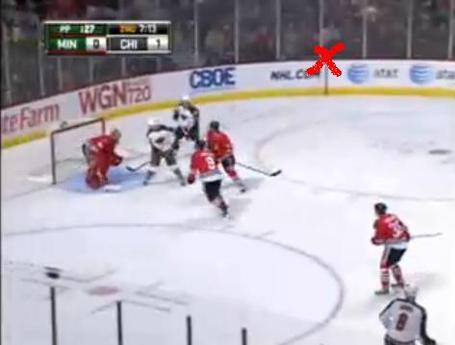 I refuse to believe a small camera couldn't be placed near the X (and three others on the other corners obviously) to get the best view of the play in front of the net without obstructing the view of those sitting along the boards (because you know those rich bastards would complain).

This isn't the first time a goal like this has been controversial... so why not put cameras in the right place to see the crossbars and where a player's stick is - no one else in this game kept thier stick down so why should we believe Fritsche did?

I'm not complaining too much about this game because Harding was obviously a bigger factor in this game than that goal - and it would have almost been a shame for him to have played so well and still lost but I could have gotten over that pretty easily.

Also, have the Refs ever come out of a review and said "the replays were inconclusive - therefore the call on the ice stands"?