Share All sharing options for: And here come the pretzels... er.. Hard hats! - Hawks Fall in OT to Pens

First of all - our apologies for getting this up later than normal.  Both Sam and I are nursing concussion from being nailed in the head by cheap plastic contruction helmets and only recently awoke from our comas and remembered that we were put in charge of a hockey blog.

That of course is not true.  Sam and I both have seats way up high in the 300 level and don't get to game early enough anymore to get the free promotions anymore

Before we get to the game, lets reminisce.  Remember a few years ago when you could decide day of whether or not you wanted to go to a game, stroll up to the ticket counter 15 minutes before the anthem, get yourself a $10 ticket and still be early enough to get any kind of give-away they were offering?  I still have a Blackhawk ice scrapper that I use every winter.

Alas, those days are gone.  Although I don't know what was a funnier sight - the people in the 100 level realizing there is incoming bombs being tossed from the rafters at them... or the Ice Crew having to come out with shovels over their heads in protection.  I loved the girls that then realized the helmets already on the ice could be used as protection as well.  McCub must have been shitting himself as he saw his give away flying from the upper levels towards the ice or the fans.  The fact that it happened twice?  Oh man.. brilliant.  At least the people who really got hit in the 100 level are rich and hopefully have health insurance to deal with their bruises and concussions..

To the game though - to put it simply, it wasn't supposed to go like this.  The script says that the Hawks were supposed to fall behind on sloppy play, storm back on the will of Captain Marvelous, get boned by the refs recalling a goal, fall behind again but come back because Toews simply would NOT let this team lose.

And it came so damn close to coming true.  But sometimes things just don't go your way.  Toews certainly did everything he was supposed to do and carried the team back to tie the game at two - to take a lead on a called back goal - then lead the charge back again after falling down another two goals.

I'm not sure if it was the Hawks looking sloppy in the first two periods or if the Penguins realized how dire their situation was and decided to actually play hockey.  Passes seemed to be off, pressure was lax and those goddamn drop passes could not have gone worse.  The third period the Hawks finally showed a Hawks team that looked familiar.  In the third period the Hawks absolutely destroyed the Pens.  The Pens managed only 4 shots.. the Hawks had 20... 20!  The end of the third saw the Hawks get a little sloppy though.

I said in the preview that special teams would decide the game and I was close to being right.  Toews led the power play team to 3 goals - but it was ultimately a power play goal with just two seconds left on a tripping call by VERSTEEG! was enough to seal the Hawks fate. The shot was probably stoppable - but I don't blame Niemi. Huet let in some soft goals.. but also made some brilliant saves.  I don't know if I liked the line changes Q made but I also don't remember if the line changes really stuck.  Getting a point out of this game was good but I wish it could have been more for Toews' first hat trick.  At least it led to some of the funniest moments I've seen at the UC.  The Hawks play again tomorrow night against a team they've really crapped the bed against - lets hope they carry that third period into that game.

If you still have a hard hat.. or you got nailed by one.. please share your stories.  I personally got nailed in the hand by one.  Which is odd since there was literally just one row behind me and then the SRO section.  Kudos to whoever got their throw off just as I was raising my hands in celebration.

The Shift Charts and the CORSI ratings are here for you to take a gander at.. probably not good for Skille that he has the worst CORSI with the least TOI.. better luck next time though and your Second City Player of the Game... could it have been any other? 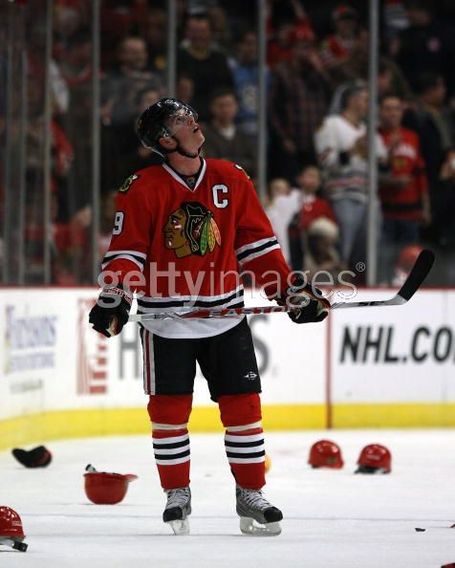