Share All sharing options for: It doesn't matter much.. but oh it's so sweet.. Hawks 4 - Scum 2

This is going to be a short and sweet preview.

First of all - the turnout at The Whirlaway was far better than we were expecting.  After reading all the comments I was 90% sure that it was going to be the three writers for this site plus Sergio.  Instead, it turned out to be about 15-20 people at the bar.  Some had just read The Committed Indian, others were friends and some were The Third Man In.  All in all, it was a way better turn out than any of us expected and a good time.  Maybe we'll try to do it again for the playoffs but definitely again for next year.

As a bonus... Hey!  The Hawks won!  After Hammer's goal in the opening seconds it really seemed that neither team was trying all that hard.  They wanted to win but more importantly they didn't want anyone to get hurt.  Sure, the scum tied on the first PP but you can't expect to give them that type of opportunity and keep them off the scoreboard.

Zetterberg's goal in the second was a result of a huge rebound from Huet and a screen from the Hawks own defense - I honestly thought the game was over at that point.  As much as we all hate the Wings, it's sometimes hard to get the acutal Blackhawks to share that hatred and play their hardest.  It might take a playoff series between these squads to really get the blood flowing.

The only player who really seemed angry was Biscuit.  Seabrook was hitting Cleary at every fucking chance.  I think he got a taste of blood with that winter classic hit and just couldn't resist anymore.

So then Eager got a goal to tie the game in the third and brought all of us in the bar back into the game.  Fantastic.  Now we had an excuse to stop drinking and start paying attention again.  Then.. something happened that none of us expected.

Byfuglien ends up with on a break away and draws a penalty shot.. and he fucking buries it!  The shot over Conklin's shoulder was great and it won the game for the Hawks.

With only 28 seconds left in the game it was a beautiful sight to see the Hawks with the sudden lead.  Ladd puts home the empty netter and the game is over.  Sam, McClure and I talk shit with Block for a while before we all get on our way.

Now we look forward for the end of the regular season tomorrow and a special season review of The Indian which you should all buy if you're going to the game tomorrow. On to the playoffs..

And another positive thing - the Nucks ending up winning OT which means the Hawks will face the Flames for the first round.  This day probably couldn't get any better so I'm going to end it here.  Enjoy today everyone - and lets make it two in a row tomorrow. 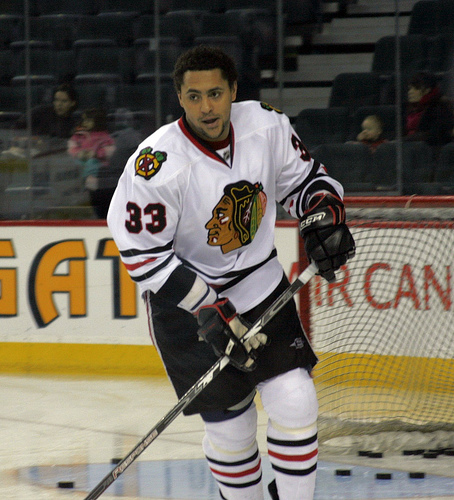 You bet your sweet ass it is.  If the Hawks were going to keep him on this team for a reason, I guess this was it.