Who's Your John Druce?

Share All sharing options for: Who's Your John Druce? 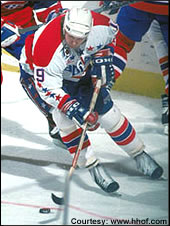 Every playoff year, someone comes from out of nowhere to be a playoff star. No one exemplifies this more than John Druce, or as he's known in hockey circles (i.e. amongst my brother and me) Playoff Hero John Druce. Druce was a middling scorer on the Caps, but in the 1990 playoffs popped up with 14 goals in 15 games.

So, who do you think could be the Hawks' version? Me, I'm going to vote for Andrew Ladd. Though he'll be primarily concerned with checking duties, he, Pahlse, and Buff have been creating their fair share of havoc in the offensive zone. With he and Buff's size they can get a cycle going and win battles along the boards. Ladd also has more than decent hands and finds himself in front of the net where playoff goals will come from. He won't get power play time (much to McClure's and my chagrin), but I think he's going to pop up with some very important goals.