I don't think I'll ever get sick of putting these triumphant Hawks' AP photos up here.  May there be many more.

Sorry for the lateness of last night's wrap, but a Saturday night home game, well, you can probably figure it out.  Anyway, the Hawks are getting better at this, slowly, putting together an impressive 40 minutes instead of 30.  First, right up top, let's get these out of the way:  Corsi and shift charts.

I have to take a moment to disagree with Rick Morrissey (one slight drawback of playoff hockey, columnists and reporters talking about hockey for the first time)  From where I sat, it did not look like the Hawks sleepwalked through the 1st again, as they did in Game 1.  Were the Flames better?  Yes, probably, but not by a wide margin.  What defined the 1st was the Flames absolute insistence on hitting the Hawks, and mostly after the whistle, and the Hawks absolute refusal to back down from any of it.  As I commented to the Smoking Crew, let the Flames concentrate on this.  It's the same M.O. with them.  They focus and focus on hitting and being snarly, let them run around and try and hit us, let them overdo it and be caught out of position.  Let them try and keep up, because I don't think they can.  Anyway, Iginla -- of course, after I call him out in The Indian -- put the Flames ahead on the PP on a rebound, and a bad bounce off of Keith's stick in front led to Aucoin's goal.  Havlat had taken off, as it looked like Keith had things under control.  These things happen, and othr than the scoreline, I thought it was a pretty even period.

Obviously, the 2nd will live in our memories for a while.  The Hawks bringing their own physical game did wonders here.  After Captain Marvel got the Hawks on the board with a strange looking marker when the Hawks had one more man than the Flames (I remember this happening a lot earlier in the year, but not so much recently.  Can you still do that?), it was time for the Fames to be nervy.  It was turnover-gasm in the Calgary zone after that.  The Hawks forecheck continually kept the Hawks pinned, and you got the feeling it was only a matter of time.  And it was.  Kane was able to chip a puck past Jim Vandermeer, who pretty much played in a daze all night, and then caught a break when Cory Sarich over committed to him when he really wasn't going anywhere except the corner.  Kane fed it out to Sharp, who made no mistake.  From there, there was only going to be on winner, and Captain Marvel proved it.

The 3rd should be receiving just as many plaudits.  Unlike Keenan, Coach Q did not go into a shell with a lead, and other than Bourque's stuff chance, the Hawks kept the Flames at bay easily.  It was a total shutdown period.  I don't know about yours, no one in my section sat down for the last 10 minutes.

A big kick for me was how AC/DC's "Hells Bells" got the arena rocking with about 5 minutes left.  Angus is clearly a god.

as if it could be anyone else: 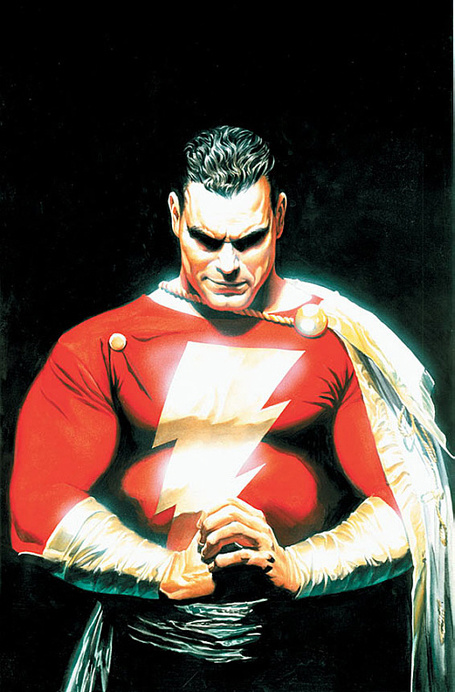 NOTE: Remember, the three of us will be at Whirlaway on Fullerton just west of Kedzie for Game 3.  Could get crowded, but you'd want a crowded bar for a playoff game, no?