All Chicago media is sick of hearing Keenan complain

Share All sharing options for: All Chicago media is sick of hearing Keenan complain

First of all, playoff hockey is going to get me fired.  Or at least the games every other day will - I'm too excited/nervous on a game day to get anything done.  Then the day after I'm just trying to stay awake and not puke on anything because I'm exhausted and hung over.  Then it's game day again...

Second, You can't really miss it - but everyone's jumping in on the Kennan is a crybaby bandwagon.  The Trib, Sun Times and the Daily Herald all have been running stories pointing out Kennan's crying in complaining about a cross check.  And Sassone's blog is becoming a must-read for all Hawks fans, as if it wasn't already.  Sassone's leading the charge against Keenan and Fifth Feather is already looking for a fight between him and Keenan.

My guess for the spark would be that Keenan's going to pissed that yet another person assosciated with the Hawks can grow a better mustache than he can.

Q just keeps getting better in our book though - instead of using the media to complain he simply says that a press conference "isn't the proper forum" to discuss what's going on.

Each game gets more intense and can believe tonight's is going to be a violent affair.  A win tonight obviously gives them the chance to wrap up the series back here in Chicago.  We'll be around with more as the day goes on.. 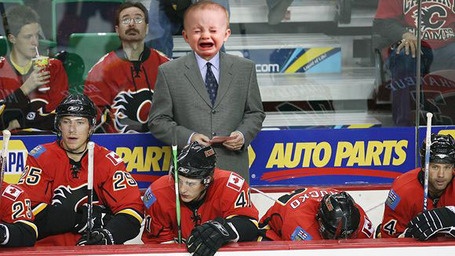