In order to advance in the Stanley Cup Playoffs, sometimes your goaltender just has to flat-out steal a game, and tonight Nikolai Khabibulin did just that. Khabby turned away 43 of 44 shots, and the lone goal he let in was somewhat fluky. No matter, as Sam said numerous times during the game "They don't ask how, they ask how many".

Once again, the Flames came out overly energized and looking to establish a physical tone, and once again, it led to a numbskull penalty, this time courtesy of professional dickhole Todd Bertuzzi needlessly elbowing Brent Seabrook. The second power play unit wasted little time, as Patrick Kane buried a shot at a gaping net off of a broken play that started with Kris Versteeg attempting to get the puck to Dustin Byfuglien with a goal-mouth pass from the left half-wall.

Byfuglien shortly thereafter, still drunk off of his realization that no one can knock him off the puck when he gives a shit, circled the Flames net after breaking the puck in one against three, and found Adam Burish streaking down the slot late, who then smoked it by Kiprusoff, compounding his shame factor for the series ten-fold.

That would end up being all the Hawks would need, though Campbell made the Flames pay for a too-many-men penalty after some nice board work by Kane, and Byfuglien had the capper with the empty netter.

The real story tonight was Nik and the defense.

Everyone knew that the Flames would come out full throttle, and Khabby had just about every answer. When he had problems controlling his rebounds in the first, the defenseman and back-checking forwards were there to clear loose pucks, even if it was only to regain center ice and dump the puck in. And aside from the hiccup on the Bertuzzi shot, Nik absorbed everything that came toward him. High marks need to also be given to Hjalmarsson and Walker (yes, Matt Walker), who both had an exemplary night in their own corners fishing pucks out and evading wave upon wave of Calgary forecheckers. And while the Flames clearly outshot the Hawks even without knowing the final count (Ed Note: Hawks-16-, Flames-44 hoo-lee shit), the Flames never had any real second or third opportunities at the net, which was the ultimate key to victory in this game.

So now the Hawks will meet the Vancouver Canucks as a result of San Jose once again filling their diapers, this time against the Anaheim Ducks. If the last two games against the Nucks are any indication of what's in store for the Hawks, fucking strap in. It's going to be a struggle. The Hawks got past the Flames on what few would argue as their best effort. Anything less than that will result in a quick ousting at the hands of the Canucks. Bodies in front of Luongo will be absolutely paramount, but the matchup of Sammy Pahlsson against the Sedins will be a very close second. Last time Phalsson was given that assignment, he found a way to frustrate them- here's hoping he can do so again.

Enjoy this one tonight, Blackhawks Nation. But tomorrow a far more difficult challenge arises. Here's hoping the Men of Four Feathers are up to it. 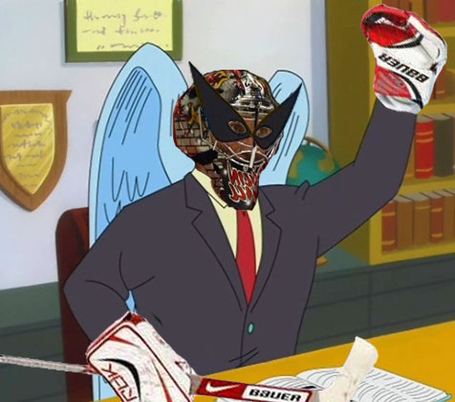