Share All sharing options for: Exactly What You Wanted - Hawks 1, Jackets 0 (OT)

Welcome to playoff-style hockey, people. The Hawks traded big saves and chances for 63 minutes, with the Hawks emerging victorious in overtime against a tough Blue Jackets squad.

The game started out with a very quickly moving pace with few whistles. Steve Konroyd and his steely blue eyes pointed out that that flow benefitted the Blue Jackets, who got back into town right around the time my car had been towed this morning. The Hawks weren't as physical as they probably should have been against a tired team, and that's something that will need to change soon with the games becoming increasingly more meaningful and intense.

On that note (not to be a turd in the punchbowl after a big win), there are a few other things that the Hawks can look to improve upon coming out of this game. First, the power play looks like a clown car that just got its hands on an eight ball. The Hawks seemingly refuse to dump the puck when the opposition stacks the the blue line to deny them entry, which leads to wasted time trying to set things up. It is the opinion of this writer that that has been the primary factor in the recent 0-for-22 dry spell Fortunately, the Columbus power play has been complete dog food all year, and the Hawks and didn't really allow them any sustained possession or chances off the man advantage. Secondly - line changes. We've seen over the past couple of weeks this contribute to odd man breaks, which it did again tonight, and also to a too-many-men penalty. This is the NHL boys, every mite knows to change on a forecheck and to not make any passes up the middle during that time. Tighten it up, wouldy ya?

Ok, back to the good stuff.

The third period was an absolute treat to watch. Things opened up ever so slightly with both teams desperate for important points within their respecitve tiers of the current playoff structure, which was enough for both goaltenders to put on an exhibition. Martin Havlat was denied on a top shelf bid off of a glorious cross-ice feed from Patrick Kane, and Toews (showing shades of Troy Brouwer), wiffed on batting the puck out of mid-air on the rebound.  At the other end of the ice, Nik was up to the challenge, making key saves off a sequence that let to a scramble in front of the net. Fortunately, the Hawks had enough men back to clear the puck while Khabby was caught out of his net and without a stick. Tonight was probably the Hawks best work of late in limiting opportunities, and getting sticks in traffic. Moving Sammy Pahlsson into a true checking role (what a novel concept) has seemingly had a ripple effect on the rest of the team, as the Hawks have only allowed 2 goals in the last three games, one of which can be credited to long time pain in the ass Bill McCreary on Wednesday.

Things continued to remain free-wheeling in the extra frame, and I don't think I'm alone in that I was quietly hoping for a shootout, just to see which goalie would blink first.

I kind of got my wish, as VERSTEEG! finally solved Steve Mason about halfway through the overtime period on a breakaway from his own blueline in. VERSTEEG! had been denied on his previous shift breaking in on the right wing, so as Pat and Steve pointed out, it was nice to see him be able to redeem himself. Key to sprining the breakway, however, was Duncan Keith and Andrew Ladd denying the always dangerous (and rumored wiener-tucker) Rick Nash clean entry into the Hawks zone. Once the puck had been stripped, Ladd softly slipped the puck ahead to VERSTEEG!, who was then off to the races. Game over.

The win puts the Hawks three points up for fourth place, with four games left to play. Calgary is idle this evening, and Vancouver will likely administer a beat down to the hapless Avalanche later on. The planets seem to be aligning for a Hawks/Flames first round matchup, which most everyone has made their preference over the Canucks. Let's hope Kipper and Iggy don't go insane on the Hawks if that is indeed the case.

A couple options for tonight's player of the game; Jesus Havlat Christ did his usual thing but didn't appear on the scoresheet, and VERSTEEG! had the capper, but for his solid, sometimes spectacular performance in net, tonight's award goes to Nikolai Harvey Birdman, Attorney at Law (thanks to Brian Ream for coining that one). 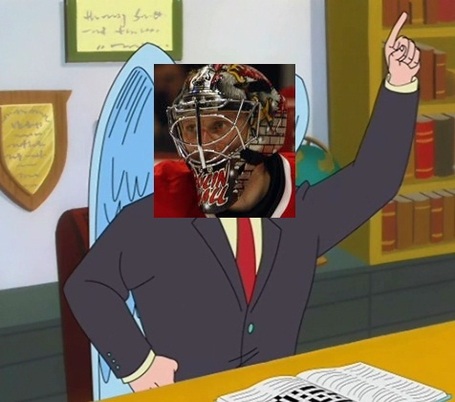 (Please forgive the shitty Photoshop job. For all my IT wizardry, Photoshop is clearly not my strong suit)