Share All sharing options for: Beard of the Day - May 18th - Yosemite Sam 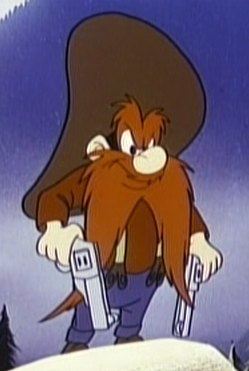 Today's beard is one I wish we didn't have to post, but it was going to happen sooner or later in this series. It's not a rivalry if a victory by your opponent doesn't elicit some honest-to-fuck anger, and there are few cartoon characters angrier than Yosemite Sam. No one makes us Hawks fans want to scream old-timey swear words more than those varmints in Detroit, and while he's now been reduced to donning mudflaps on trucks with lift kits driven by hillbillies, Yosemite Sam was one of Bugs Bunny's most worthy adversaries. And by far the loudest.

Besides, it's Monday anyway, and after yesterday afternoon's game (and reading the comments in the game day thread....yikes), it's likely we could all use a laugh.