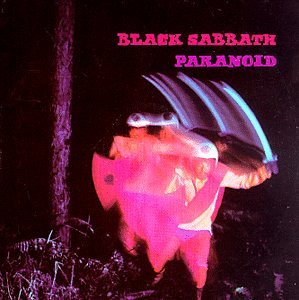 Though War Pigs is one of my favorite songs of all time and the entire album is solid... Paranoid has one of the worst album covers of all time - what the hell is that?

This is it - for the next three games, we get our first literal "must-win" games.  And we have to do it without Khabby and JHC.  If we told you back in September that you'd be depressed when you heard Khabibulin wouldn't be starting Game 5 of the WCF you might have punched us in the face... but here we are.

At least the Scum are without big guns of their own - taking Lidstrom and Datsyuk almost evens the injuries up.

Sam's accused me of drinking the Kool-Aid for saying it's going to be Blackhawks in 7.  I told him it was Hi-C.

The Hawks can pull this off though, don't think I'm saying it just to be a homer.  They've played two games close to their full potential and both went to OT.

In Game One they looked starstruck and confused.  After playing 12 games in a row of tough slow  mean boring hockey they found themselves against a team that had no problem skating with them...

Game Two was closer - A few mistakes, some bad plays and one brutal turnover that lead to an OT winner for the Scum.  This game still could have gone either way..

Game Three - Closest game yet to what we wanted to see.  A bit of a relapse lead the Hawks to tying it but now we see it may have also been an injured Khabby out there trying to stop those pucks.  No one will argue with the result.

Game Four - Still trying to convince myself that never happened.

Get their heads on right - they can win this game.  Steal one on the road, take one back at home and anything can happen in a Game 7.  Crazier things have happened... Jim Belushi keeps getting work, right?

The biggest goals for the Hawks have to be playing physical without losing it.  Their forechecking works against the Scum.  Put pressure on them, disrupt their breakout game but do it without losing your cool and taking a penalty.

Play perfect or go home.  You'll never go far hoping the Wings take a game easy so the Hawks have to be as close to perfect as possible.

I don't know about all of you - but I am in no way ready to focus my time on the Cubs and I hear the Sox aren't doing too well either...