With the season now over after a return to the playoffs and the Western Conference Finals, we're looking back at each player who wore the Indian Head sweater for the 08-09 Season and grading their performance. Oh ballllllllllls, it's time for Matt Walker, isn't it?

The Good: Matt Walker was brought in as an inexpensive depth defenseman this offseason, who was expected to provide some toughness and size on the Hawks' blue line for cheap. Walker ended up posting career highs in every conceivable category while being bounced around the bottom two pairings, either with Brian Campbell or Cam Barker. Despite extremely limited offensive abilities, Walker turned in the shift of his life in the offensive zone, which led to Patrick Sharp's overtime game winner in Game 3 against Scum. And on the toughness front, he was willing to stand up for teammates, including memorably beating the fuck out of an arguably unsuspecting Ed Jovanovski during the early stages of the December March To The Sea.

The Bad: Walker was, is, and always will be a #7 or #8 defenseman, with minimal speed and skating ability, as well as questionable decision making and positioning. All of these reared their ugly heads during the latter part of the season, causing everyone even tangentially affiliated with this site to openly wonder what Walker had pictures of Joel Quenneville doing that allowed him to stay in the lineup over Aaron Johnson. And while he did have a career year numbers-wise, it's not a high standard of excellence that was surpassed when you have one career goal coming into the year. Above all, the eye test showed a defenseman that looked woefully out of place on a team built on speed and precision, and one that is a liability in all three zones, causing fans to hold their collective breath when handling the puck or defending against a forward with even marginal wheels. 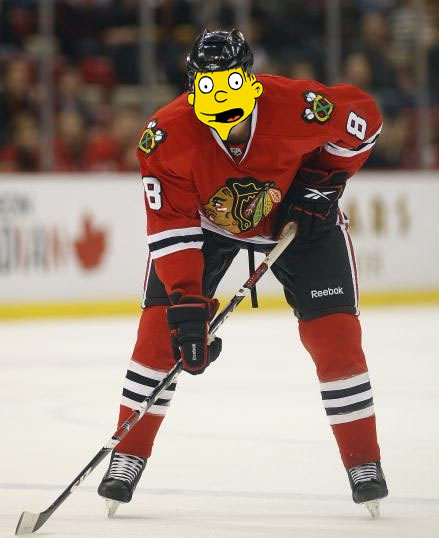 The Grade: As stated above, it's hard to dog a guy that completely overachieved beyond anyone's expectations offensively. But with the standard so low, and all of the warts in his game still readily apparent with a few major gaffes tossed in for good measure, I'm hard pressed to give him any more than a C. What say you?