The Good: Let's start with the best, and that was Bur's playoff performance. Not only was Adam a pain in the ass to everyone he came across, and might have his picture in Calgary and Vancouver post offices, but he played some dynamite hockey. He chipped in some very important goals, was pretty nails on the kill as well, according to Behind the Net. He also never stopped moving his feet, and when put on a line with Sharp and Eager during the Vancouver series was part of a unit that always got the Hawks going. Who's going to forget his celebration in front of the Vancouver bench after tying the game at 4 in Game 6?

As far as his regular season good stuff, it's less so. But he was still effective on the PK, and had some games where he got things going in his 4th line duties. Also, 6 goals is something we'd never thought we'd see. Oh, and he banged half the city, so cheers to that.

The Bad: Some of this, too. Burish spent the first half of the regular season drawing the ire of this observer, as I couldn't figure out what it was that he does for this team. He stopped fighting, which is probably a good thing because he kept getting pummeled. He was only so-so on the kill, frequently getting caught out of position. He took some amazingly dumb penalties, and wasn't getting under anyone's skin. He was responsible for the line brawl against Vancouver in March by tying up all the linesmen when he should have skated his ass off so his d-men didn't have to clean up his mess. These are still some of the warts in his game.

Playoff Beard Strenght: Pretty strong, and may have saved his life when Eager's skate couldn't quite cut through it all.

Related Photoshops: Well, there was this one: 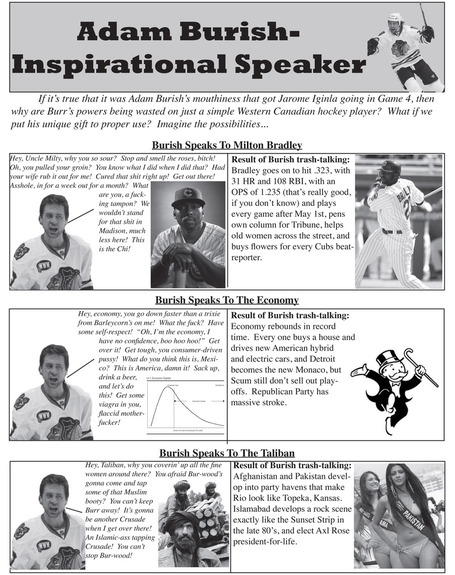 The Grade: Whatever my complaints are about Adam, one has to realize that he's a 4th line player, and that's all he'll be, and that comes with its pluses and minuses. Though some of his antics rubbed me the wrong way, when Burish was killing penalties well, the whole team did. He's also a leader in that dressing room, you know the guys love him. And when it mattered most, Adam played his best hockey. And, as I've said before, he seems like the type of guy who if you met him in a bar, not only would he buy you a few beers, he'd help you get laid. So I'll give him a solid B, what say you?