With the season now over after a return to the playoffs and the Western Conference Finals, we're looking back at each player who wore the Indian Head sweater for the 08-09 Season and grading their performance. We now turn our attention Gary Roberts' favorite whippersnapper, Ben Eager.

Ed Note: On March 25 against the Sharks, a column of mine appeared in the Indian detailing each and every one of both Ben Eager's flaws and assets and why they drove me nuts (Yarr!) in a very hastily and moronically titled piece. That 1,100-word Pulitzer winner can be found here.

The Good - In the 2008-2009 campaign, Ben Eager posted a career high 11 goals, and led the team with 161 penalty minutes, taking over the team's de-facto "enforcer" role from Adam Burish. (The argument for or against the Hawks' need for an enforcer can be made at a later date- short answer: they don't). He achieved these numbers while filling a fourth line role and averaging slightly less than 9:00 minutes of ice time a night. When asked, Eager did not look out of place on the rare occasions he filled in on the top two lines, because the guy never stops moving his feet. He uses his size quite effectively as well, finishing every single one of his checks, and shows a willingness to stick up for teammates using the pugilistic arts. He also beat the crap out of chatty-Cathy Kevin Bieksa during the infamous line brawl against Vancouver, so kudos for that as well.

The Bad - Aside from the Bieksa bout, I'm hard pressed to cite a fight he actually won- which is not good if you're trying to instill any sort of fear in the opposition for taking liberties with the Hawks' young guns. Not to mention that many of those 161 PIMs were as a result of stupid, cheap, retaliatory, selfish, and immature penalties. The most vicious of the bunch was a cheap shot elbow to Edmonton's Liam Reddox's head, which eared Eager 3 games of unpaid vacation, to borrow a Dan McNeilism. That immaturity also reared its ugly head at the tail end of the Detroit series, with Eager earning an impressive 3 misconduct penalties in two games. It's hard to be considered anything close to an asset to the team when you're off the ice that much in the two most important games of the Hawks' season.

Playoff Beard Stregth - A sufficient amount of grizzliness indicative of a trip to the conference finals.

Related Photoshops - I don't even know what this means, but it's courtesy of mjthor, as usual 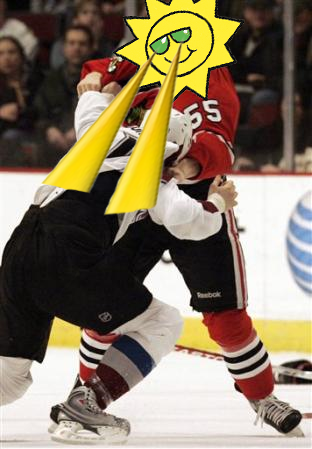 The Grade: We again have a case of a guy simply achieving, neither over nor under. The numbers prior to this year say that this is what Ben Eager was, and that's what the Hawks got from him. He brought just as much negative in his game as he did positive, and given his RFA status, and Aliu and Beach lurking on the horizon, it would not break my heart in the least to see the Hawks let him walk. He's a homeless man's Chris Neil, and I think Chris Neil sucks. But since we're grading partly on expectation, I'll give him a low-to-mid C. What say you?