With the season now over after a return to the playoffs and the Western Conference Finals, we're looking back at each player who wore the Indian Head sweater for the 08-09 Season and grading their performance. Next up, they guy you shouldn't share a water bottle with, Samuel Pahlsson.

As a Blackhawk (regular season only):

The Good: The Hawks acquired Pahlsson on March 4th at the trade deadline for Wisniewski but it wasn't until the 18th that he finally suited up for the Blackhawks against Columbus due to a case of mono. He didn't start off too hot but ended up finding his role quite well, that is he played his role well when not being forced to play with Kane and Versteeg. While playing with Ladd and Buff he was exactly what we'd hope for - a strong checking center who wins face offs (53.5%). One game that stands out in my mind (and I've got a terrible memory) is the last season game against the Blues where Pahlse, along with Buff and Ladd, not only completely shut out the hot "kid line" of Oshie-Berglund-Perron but also notched his first goal as a Hawk.

Of course you also have to mention the impact Pahlsson supposedly had on some of the Hawks, particularly Buff. If Pahlsson is somehow the key to getting Buff motivated and trying hard then he'll be worth whatever contract Tallon can get him to agree with.

The Bad: There isn't a ton - you're going to have a poor +/- when you're playing against the best other teams have to offer every single game. I suppose you could hope for slightly better offensive numbers from Pahlsson. 18 points is fairly low, even for Pahlsson, so maybe get on the board a little bit more?

Also, a 30-year-old getting mono is pretty bad - that's gotta be an awkward thing to explain to your wife, right? I once thought I had mono for an entire year, turns out I was just really bored.

Playoff Beard Strength: I think along with Huet, Sammy was the only one on the Hawks roster to not grow out a beard. Though he is a blonde swedish guy, maybe it was just invisible.

Nicknames: Sammy, Sami, Sammi, Pahlse and His Name Is Sammy Pahlsson (if you're not into the whole brevity thing)

Related Photoshops: Again, not a photoshop really and we didn't make it (Sleek did) but it's still awesome 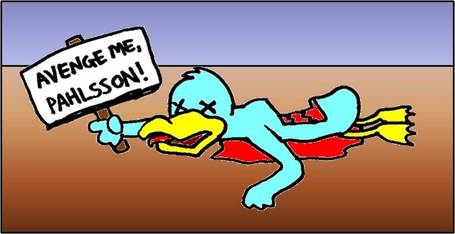 If only the Hawks could have done it...

The Grade: A small sample size to go on with Pahlsson as a Hawk (and a pretty shitty review... sorry) but I think you have to give Pahlsson a high B. He came in doing exactly what we expected of him and helped the Hawks in their weakest areas when they needed it most.