With the season now over after a return to the playoffs and the Western Conference Finals, we're looking back at each player who wore the Indian Head sweater for the 08-09 Season and grading their performance. Next up is one seriously lucky man, Craig Adams.

The Good: Not much with the Hawks really. He did his role which is to not be completely lost out there but there wasn't any room on the team for him. So he was waived - and picked up by the eventual Stanley Cup Champions. That's pretty damn good. The fact that he had 3 goals and 2 assists in the playoffs is amazing. That's 5 points in 24 games compared to 7 points in 45.

The Bad: Can't really say there's much "bad" to Craig Adams - no one expected him to light the world on fire and he didn't. He's not very gifted on offense (except for the playoffs evidently) and he never is a huge liability.

Photoshops: None.. but he's in here somewhere. 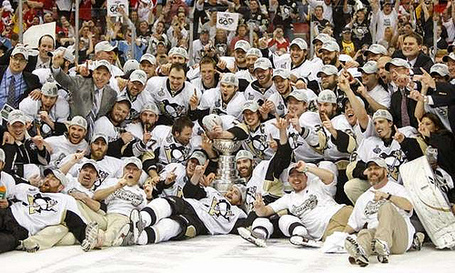 The Grade: Does it really matter what we grade him? I'd have to say a C or a B but congrats on winning your second cup Craig. I was rooting for you.