Oh you thought we were done with these reviews, didn't you? Well we ain't. On April 23rd we featured probably my favorite Beard of the Day of the whole playoffs - Billy Mays. If you weren't too busy listening to Thriller for the 70th time in a row, you may have heard that he passed away this weekend too. They say celebrity deaths always come in threes - Ed McMahon, Farrah Fawcett and Michael Jackson... but leave it to Billy Mays to throw an extra one in there for free. So to pay tribute, we're giving you one extra season review - Joel Quenneville. 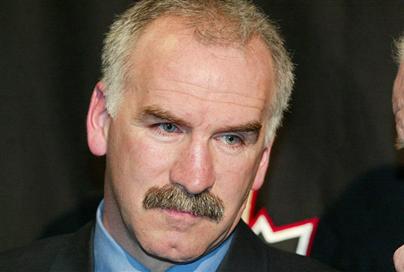 First off - sorry about how weird that info box looks. I edited the thing manually and can't figure out how to make it look better. Sue me.

The Good: A 104 point season and a trip to the Western Conference finals - that's the good. OK, 3 of those points belong to Savard but it was Q that was the man that lead the team (other than Toews). Q was a better choice to coach the team for many reasons. He's better at playing match ups, better at implementing special team systems and bluntly, just a better coach. The Blackhawks were supposed to be good, everyone pretty much expected them to make the playoffs. I don't think most expected them to head to the Western Conference Finals. Q's even hand was a good reason for that - he showed discipline that the team needed, benching both Sharp and Kane for dumb penalties, benching players when they didn't play well (sometimes) and providing the Hawks with the experience they needed.

Whether by luck or by intuition, Q was responsible for putting together one of the more dominating lines in the NHL with Ladd-Bolland-Havlat. So even if it was blind luck, at least he stuck with it.

The Bad: Lets start with the fact that Walker played 65 games. We're hard on Walker, sure, but there's really no reason that he should have played over Johnson for so many games. Q seems to have a boner for Walker's "toughness", which I guess was something the Hawks lacked but it still doesn't make up for his coverage in his own zone. Some of the line's that Q went with didn't quite make sense either - The Versteeg-Pahlse-Kane line never made much sense but it was sent out there well beyond the experimenting time period. His tendency to play the "best match-up" might have been a bit too strict at times too.

Lets also mention his blow up in Game 4 against the Red Wings. Now, coaches lose their cool and it can be a good thing, just think of all the MLB managers that are notorious for losing it and are thought of as legends, Cox, Martin, Piniella, Weaver. They're full of them. But they do it at the right time. Game 4, when the Hawks were only down 2 goals was not that time. The Hawks had made a habit of coming from behind in the playoffs... they were still in it. Instead, Q blows up on the fact that Walker got a roughing penalty for nothing. The team then followed suit and the Hawks were out of the playoffs.

Is it fair to say the Hawks lost the series right at that moment? No, but it's close. They probably lose to the Red Wings anyway but Q's explosion didn't help. Q needs to find a way to beat the Red Wings, something he doesn't have the greatest record of doing.

Playoff Beard Strength: Q says to hell with your beards - He'll keep his perfect mustache thank you very much. Can't say I blame him - dude's been working on it for longer than most of us have probably been alive. This is still one of my favorite pictures of him: 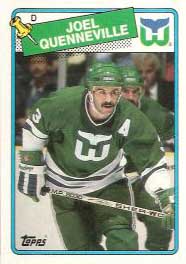 Related Photoshops: We've been trying our hardest to get a Quenneville photoshop involving Q from Star Trek: TNG but we can't find a good reason to use it and it's probably too obscure, even for this site. But if any of you can do it - you'll have our eternal gratitude.

The Grade: Time will tell if Q is the right man to lead the Hawks to the cup but I don't see how there could be many complaints based on his performance this year. He'll need to keep a cooler head when the game reaches the heights it did in Game 4.. but for this past season I give him an A.