If you listened to HockeeNight's puckcast last week, you'll have heard Chris Block, Forklift and CT discuss Sam and I for a brief second.  After claiming Sam to be a "frail individual" (probably true) they discuss which Blackhawk I most resemble. 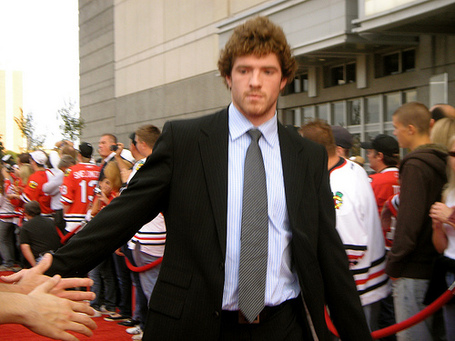 So I'm a 4th line center at best... great.  I don't see it in either of them except for similar hair..

Well, the Blackhawks announced today that they have signed Cullen to a new one-year deal.  There haven't been any numbers released yet but it probably isn't much for a 30 year old guy who has played only 32 games in the NHL (the last being 3 games in the '06-07 season with the Flyers).

The signing will no doubt just add more fuel to the fire that the Hawks are planning a move and are getting pieces in order to ship people around.  So continue with the latest trend and throw around trade rumors in the comments.

Also, some combination of the three of us will be joining Fork and CT tonight for this week's puckcast, so keep an eye (ear?) out for that tomorrow...