Why The Olympics Scare The BeJesus Out Of Me

Share All sharing options for: Why The Olympics Scare The BeJesus Out Of Me 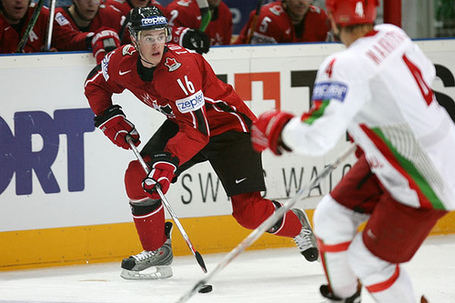 Of all the things coming up this season, the cap headache, the goalie question, the crowded forward line, nothing scares me as much as the Olympic break.  We can have the discussion another time about whether this system makes any sense (it sort of does and sort of doesn't), but it's going to happen.  The season will stop for two weeks, and some of our most important players will have 6-8 high intensity games in a silly short time span tacked onto their schedules, as well as a compacted NHL schedule to return to.  For evidence on how this can royally fuck up a team, one need look no further than the 2005-2006 Senators.

That team was loaded.  Then the Olympics came, and Spezza, Heatley, Alfredsson, Hasek, Redden, and Chara shipped off to Turin.  That's your startin goalie, your entire top line, and your top d-pairing.  As you may remember, Hasek got hurt and didn't play again, and the Sens bowed out in five to a clearly inferior but hot Buffalo Sabres team, who only had three Olympians in Kotalik, Afinogenov, and Drury.

This was also the same year that Scum reverted to their alternate form, known as Team Sweden, and were bounced in the first round by the Oilers (still kinda hilarious).  Can you make an argument that fatigue didn't get to these teams?  I'm not so sure.

It's hard to predict how many Hawks will be making the trip to Vancouver.  We know of three for sure, as Hossa and Kopecky will be suiting up for Slovakia and Kane for the Red, White, and Blue (and if our season hinges on Kopecky's health, we're in fuckloads of trouble, so that doesn't really matter).    Now, there's a possibility that Toews, Sharp, Keith, and Seabrook will suit up for  Canada, as well as Buff for the US, or it's just as possible that none of them could.  So it could be anywhere from 3 players (2 important) to 8 players shipping off.  That would be almost half your regular skaters having their season extended and bodies being pounded even more.  Not so good.

The smart money tells you that not all of them will make it.  Yzerman has an almost dangerous crush on Toews, it's likely he goes.  We love Sharpie, but as soon as Canada sees he's not quite as versatile as he used to be, it's unlikely he'll be picked as just a sniper. They have tons of those.  It's hard to get a read on Keith and Seabrook.  If you asked me in February last year, I would have told you Keith was definitely going and Biscuit wasn't.  After the playoffs, the buzz from Hockey Canada was that Seabrook's stock was shooting through the roof.  Now it seems if you pick one you pick both, but I can't honestly believe that those two are amongst the best two Canadian d-men.  Hopefully neither do, but I get a feeling Flash (Duncan Keith) will be wearing a Maple Leaf.

I don't know about Buff.  Burke loves size, the US squad lacks it in serious proportions, and if Dustin shows any of his playoff fire early in the season, he's going to get a serious look.  So the likely number of Hawks Olympians is around five, our three best forwards, possibly one or both of our best d-men.  Luckily, the Hawks will be younger at this point then either the Sens or Wings were in 2006, and maybe can handle the extra workload.  I'd rather not deal with it, though.