What Does Your Keen Eye See?: Sam Forecasts The Future

Share All sharing options for: What Does Your Keen Eye See?: Sam Forecasts The Future 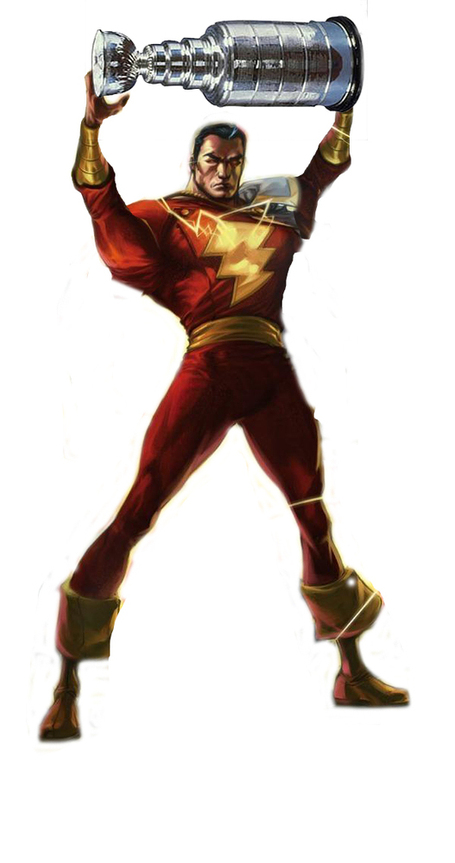 Make It So, Captain

The title of this entry is pretty funny.  After all, if I could predict the future I'd do a hell of a lot better at the track, and wouldn't be wagering on Jake Delhomme to cover.  Anyway, over the next three days each of us will forecast how we see this season going (Killion and McClure have just been informed they'll be doing so) and I'll kick things off.  Do I think we'll see the pictured action in June?....

It's so hard to say what will happen in the NHL, where injuries are a common occurrence, and then dips in form from certain players and others coming out of nowhere.  But I'll do my best.

Hawks Point Total And Finish - 108 pts., 1st in The Central, 2nd in The Western Conference

Obviously, without significant injury, I expect the natural growth of the Hawks skaters to lead to a slight improvement this regular season.  As far as first in the division, as I pointed out in The Indian, with the Olympics this February, Scum's core will be playing in 100+ games from the fifth straight season, and I really wonder if they can hold up.  Datsyuk was injured last season during the playoffs, as was Lindstrom, and you wonder if it all won't start to take the toll.  It'll go right down to the wire, but I think the Hawks nip the division.

As far as the conference, well, the Sharks are good at the regular season, and they'll have to actually play well to win the division this season unlike last, as the Ducks will keep their attention all year.

I was heavily tempted to put Toews here, as I think he'll break 40 goals this year and if Sharp or Hossa is on his wing the whole season his assists will go up.  But Kaner, who everyone says has bulked up, will take all the crap from the offseason, all the taunts he'll hear, all the jokes he'll be the butt of, and do his talking on the ice.  We'll finally see him shoot more, and he'll be dishing to Hossa -- one of the best finishers in the league -- at least on the PP.  Kane's point totals jump.

Without that 12-game drought to start the season, Toews may have gotten here anyway last season.  Now that he's accustomed to the captaincy, I doubt we'll see nearly the number of performances where Captain Marvel tried to do everything from board work, scoring, and escorting people out of the 300 Level at the same time.  With a hopped up 20-Cent on his right, Marvel gets past 40.

I expect the Hawks to aim for 60 starts, but I expect one niggling injury that knocks him out for a week.  These are right in line with his career stats, and though while not spectacular, are way more than decent, and we'll get the Hawks where they need to go.

When you think about it, there isn't a huge list to choose from.  We saw most of this roster last year and know what they're capable of.  But I'm going with Brouwer here.  Whatever he is, Brouwer knows the game.  He's almost always in the right spot, and with Hossa gone for two months may even get time as the big body on one of the top-2 lines.  Now that he knows he can play in this league, as well as some improved skating, I expect a more relaxed Troy Brouwer to bang home a lot of the chances be blew last season and demonstrate the scoring touch he showed in the AHL.  But Brouwer doesn't have to have a big season numbers-wise to break out.  If he forms a punishing checkling line with Ladd and Madden, and snuffs out opponents' scorers like Spartans snuffing out Persians at The Hot Gates, he'll still help the Hawks be awfully formidable.

5. Anaheim (this'll be a hilarious first round match-up)

7.  St. Louis (this'll be a nightmare of a first round match-up)

The Postseason:  In the East, I'd love to sit here and say I trust a 35-year old Tim Thomas to navigate an NHL season, possibly US Olympic starter for the US in Vancouver, and then the playoffs.  But I can't do that.  Without a superlative performance from Thomas, I don't know the Bruins have quite enough scoring.  The Caps have bigger goalie questions, and have folded in Game 7's at home two years in a row, and their blue-line makes me urpy defensively.  I just don't believe Pittsburgh can go to three straight Finals, although I base that on nothing.  Which leads me to the Flyers.  Yes, Emery is a nutbar, but he's a talented one, and has already got a team to the Finals.  Maybe putting on the Orange and Black just makes goalies bad, but maybe Emery is just crazy enough to probably not care.  The Flyers are loaded at forward -- as much as the Hawks are -- and the pick up of Pronger makes an already underrated blue line corps even better.  The Ill-a-delph will be rocking.

In the West, well, I'll be honest....I think the Hawks win it.  I really do.  Despite the Everest-amount of bullshit that went on this summer, what I can't ignore is this is the best Hawks team of my lifetime.  They can score from everywhere, they have a leader who won't let them give anything less than vomit-level effort, they have a defense that can shut you down when necessary.  Assuming no more major injuries, I think we're making our first Finals appearance in 17 years.  San Jose has spit the bit under two different coaches now, I think whatever's rotting them from the inside is too ingrained.  I've already mentioned my concerns on Scum, and Anaheim's blue-line past Niedermayer has concerns, though that team scares the absolute fuck out of me.

I'm sorry, I won't come out and say how I think this turns out.  I just can't.  I'm not physically able to type the words.