Share All sharing options for: Check Your Head - Hawks 3, Flames 1

I think it's pretty damn safe to officially say that the Blackhawks are completely and thoroughly mindfucking the Calgary Flames.

After getting their dicks kicked in by San Jose earlier in the week, everyone and their uncle (including the Hawks coaching staff as we'd later learn in the telecast from Mike Haviland) expected the Flames to come out with bottle rockets up their asses looking to not only avenge their latest embarrassment, but the last two embarrassments they had suffered at the hands of the Men of Four Feathers. However, Calgary hit the ice shockingly listless in the first, likely out of fear that running around would lead to giving the Hawks numerous power plays; power plays the Hawks cashed in on repeatedly in the last encounter. The Hawks matched their tentativeness in full expectation of a high octane first period, but once they realized that there was no impending surge from the Flames, the Hawks began to dictate the play and settled into the puck possession game that we've all come to expect after 51 games of this campaign. Patrick Kane was sprung on a breakway, and was granted a penalty shot when Mark "It's the fresh ingredients" Giordano hooked Kane after he was going to be in alone on Miikka Kiprusoff. Kane surprisingly went to his forehand on his penalty shot bid, and Kiprusoff denied the shot with the left pad. The frame ended in bagels, but the Hawks held a shot advantage of 11-5, and allowed no shots on the lone Calgary power play of the period.


That theme carried over into the second, as Kiprusoff repeatedly had to keep his team in the game, notably denying John Madden twice on golden chances, one on a feed from VERSTEEG!, and the other on a redirection on a shot from the point. When the Flames finally committed the penalty they were clearly so piss scared of taking, the Hawks made them pay for it after a magnificent steal and cross ice pass from Jonathan Toews, who somehow spotted Patrick Kane alone on the weak side, and stole the puck and fired a 50 foot backhand pass on the money in one motion. Kane snapped a one-time shot that squeezed through Kiprusoff to give the Hawks the lead. Calgary would answer on a power play toward the tail end of the period when a puck that had slid past Antti Niemi's initial pad save came to Jamie Lundmark who poked it home to tie it. A late icing gave the Hawks a faceoff to Kipper's right, and a smart setup and excellent faceoff win by Patrick Sharp gave Kris Versteeg a golden opportunity to Kiprusoff's left, but it would be one he would shank wide, and the period ended knotted at 1.

The Hawks would play a very workman-like third period, so it seems fitting that the fourth line would account for the deciding goal just short of six minutes into the frame. A very spastic rush by Fraser, Kopecky, and Eager would lead to Kopecky firing a shot from just inside the far ring that would bank off a streaking Ben Eager's knee and skate and into the net.  The obligatory booth review confirmed it was a good goal that was not kicked in, and the Hawks took the lead for good. A late flurry where Calgary finally became interested brought the shot total far closer than it could have been, but the Hawks efficiently snuffed out numerous Calgary opportunities around Niemi, and it eventually led to the Hawks' first empty net goal of the year (the last team to pot one), courtesy of Duncan Keith. Hawks 3, Flames 1, and six of eight points halfway through the road trip. 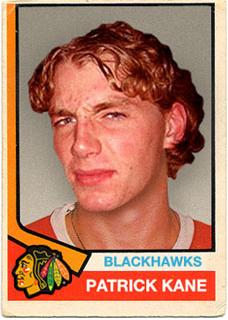 There were numerous Hawks who could have received this prestigious award for tonight's game (as well as Miikka Kiprusoff), but we're going to give it to 20-Cent, who drew a penalty shot, scored his 21st goal, and controlled the offensive zone play while being defensively responsible tonight.