I Saw What You Did And I Know Who You Are

Share All sharing options for: I Saw What You Did And I Know Who You Are 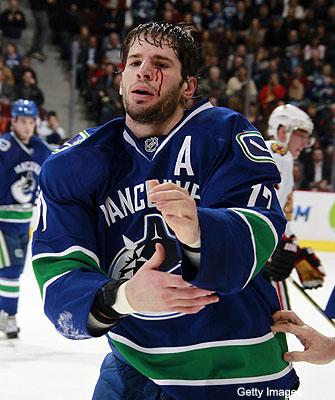 Not to dwell on it too much because it's a relative non-story, but it is a slow off day on this long road trip, so it felt post-worthy. It was somewhat encouraging this morning to read that some national bloggers feel the same way a lot of us do regarding Ryan Kesler's turtle act against Andrew Ladd and his whining to the media in the aftermath of Saturday night's game.  Behold Two-Line Pass of Puck Daddy:

Ryan Kesler sure came off like a punk after that fight with Ladd.

"He's a coward, he'll always be a coward," he said after the game. "At least he was man enough to hit me when I was looking this time."

Know who's a coward? Kesler, for that lame takedown before he even threw a punch. You got beat, Kes. Act like an adult.

Thank you very much for the insight, Mr. Pass. Now that we all have closure, vindication, and validation regarding this issue, let's all move on and start to focus on tomorrow's tilt versus Deadmonton.

P.S. - Not to beat another dead horse, but I'd also like to personally thank everyone who made it out to the Whirlaway on Saturday. It was an unbelievable turnout with a lot of great people that made the ugly loss somewhat bearable. And, as Sam pointed out, Saturday 100% confirms our shared feelings that the St. Louis trip is going to be an absolute shit show (in a good way- kinda).