Time To Get On The Soapbox

Share All sharing options for: Time To Get On The Soapbox 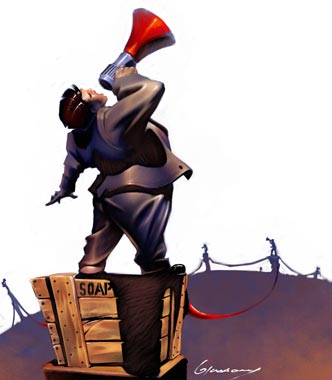 I don't know why I feel the need to get out in front of this, but I'm going to because I'm bored and I'm not doing anything anyway (I'm sure someone would like to insert a masturbation joke here, but I'll leave that to you). After the photos that came out yesterday, I am positive that Rick Morrissey, or David Haugh, or Barry Rozner, or whatever other columnist who make up the pathetic collection of writers we have in this city is going to bleat on about something having to do with the Hawks not taking their jobs seriously (almost certainly out of jealousy). We've seen both the Habs and Flyers come in for the same type of criticism from their city's media.

In the utmost honesty, I could not give a flying, driving, running, walking, or crawling fuck what the Hawks do away from the rink. Never have I watched a game where I thought, "Man, these guys are hungover and wasting my money." Patrick Kane could snort a pint glass of coke off of a stripper's tits every night, and as long as he put up a point per game, it'd be fine with me. The only problem I have is the women in this picture look like ones McClure and I would be hitting on at Oakwood at 3:35am on a Tuesday. But whatever, to each his own. With the occasional stinker aside, as long as the Hawks leave it on the ice, they can leave whatever they want on the bar room floor, bathroom, or skank's stomach they please.

-For the record, in the most technical terms I'm half-jewish, but have never been to a religious service of any kind, and find organized religion an utter crock of shit, but am accepting and jealous of those who find meaning from it. I don't view my status as a member of a certain tribe as a license to do whatever jokes I want. I write and perform jokes that are funny, and that is all. But in the interest of fairness, for the rest of the day this blog will be completely Christian: i.e. humorless, ignorant, and completely fearful and hating of women. There, I feel better.

-The Committed Indian Ombudsman (also known as my brother) has suggested the following three nicknames for Troy Brouwer. Hey, we'll do a poll!