In Chicago - Anything Is An Excuse To Hire A Goon

Share All sharing options for: In Chicago - Anything Is An Excuse To Hire A Goon

As Sam pointed out in the post below, we were all prepared for the onslaught of pseudo-outrage over the photos that our friends over at The Kurtenblog posted.  If you're a columnist in this city, and probably everywhere else too, you patiently wait all year for something like this to happen.  It's an easy couple hundred words you can churn out in a few minutes about over-paid atheletes not taking their jobs seriously... then you can go hit up the Billy Goat and get plastered yourself (and likely try and fail to pick up girls far less attractive than those 3).

According to RIck Morrissey, the Blackhawks are going to pay for these photos on the ice because other teams won't take them seriously and they certainly won't be scared of them.

Now, this is idiotic for several reasons that I probably don't need to explain to all of you... but I'm going to anyway.

With the photos likely already in the hands of opposing teams, we're talking about dead men skating here. They are perfect candidates for strategic elbows, surgical stick work and milk-money bullying, just on general principle. This is not going to be pretty, seeing as how the Hawks lack an enforcer.

Patrick Kane and Kris Versteeg are 5'10 and listed at 178 and 182 Lbs respectively (and maybe generously)... since when have they ever not been prefect candidates for cheap shots?  We know Versteeg will drop the gloves and throw some punches.. but that's only if it's Kyle Turris or Patrick Eaves on the other side of the fight.  Morrissey obviously doesn't read Behind The Net's amazing site either (one of many problems with Morrissey really).  If he did, he'd know that Kane already takes a beating on the ice just about every game.  Even Iron Madden has made a career of playing tough hard minutes on checking lines but only has one fighting major in the NHL.

If another team wants to play dirty against them, they were going to do it long before these pictures came out.  The Blackhawks have been targeted all year by teams trying to get overly physical with them and knock them off their game.  The result so far has been the Hawks at or near the top of the league in points, goals, shots and whatever else you may want.  Ask Calgary or Vancouver how well gooning it up went in the playoffs last year.  I can't believe any one gets paid to write about these teams and still laments the lack of a true old-school fighter... but so it goes.  As we've said all along on this site, we'd much rather work on improving the power play than wasting a roster spot on an ape who can barely skate but punches people in the face real good.

Morrissey could have and probably did write the same thing about Kane in the off season after the cabbie incident.  We were all a little worried about how Kane would react to the taunting he'd receive after punching an old man over 20 cents.  As it turns out, it didn't really hurt his game in the slightest.  He's 4 goals and 13 points away from setting new season highs and he's a plus 14 which shocks all of us.  If the embarrassment over the summer didn't phase him, this certainly shouldn't either.

Now, there's been plenty of talk in the comments on this site about the fact we're disappointed by the pictures... not that they were taken really but in the fact that the girls weren't much hotter.  Not to say they girls aren't attractive but we build up these players in our minds to be everything we really want to be.  They get paid millions of dollars to play a sport that we love and that many of us actually spend a good portion of our own money to join a beer league on our nights off.  So we want them to score the highlight reel game winner, polish off a 5th of whiskey without hesitiating and then go home with the 11 out of 10 every night because that's just what happens when you're a professional athlete, right?

Am I offended by the Internet photos showing some shirtless Blackhawks in a limousine -- a limo that also carries several fully dressed women?

No, I'm offended that the players look like members of 'N Sync or Backstreet Boys in the photos.

No, the issue here is what we want our hockey players to be. And I'm here to tell you that they're not supposed to be impish Justin Timberlakes or naughty Nick Carters. They're supposed to be tough-looking guys. In the photos, these guys are a cross between the silliness of the Beatles and the suggestiveness of the Spice Girls.

Umm.. Ok, I thought it was a little weird that Patrick Kane evidently waxes his chest too but getting outraged by the fact they aren't covered in scars is a little much.  They can look like anything they want without a shirt on as long as once that sweater is on they do things like this. I'm sure this part of the article was written tongue-in-cheek (good god, please don't let it be serious) but come on... not all hockey players are going to be as scary as Probert.  Has he never seen this picture before? 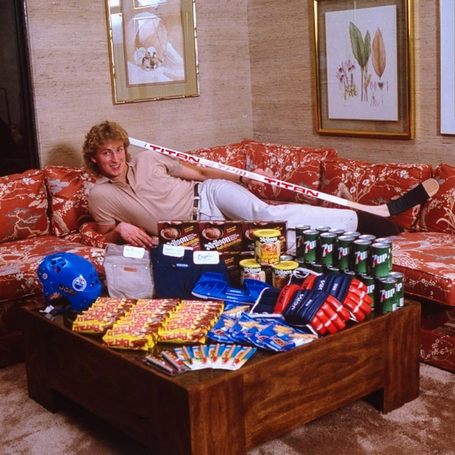 via sportsillustrated.cnn.com
That's far more embarrassing than anything we saw in the back of that limo.