Ain't that some shit?  I was all ready to write a quick re-cap of how awesome the Blackhawks were again and then go out and continue celebrating the evening.  Instead, I'm almost at a loss as for what to write.  Sometimes a team just completely blows a game, and this was one of them.  Now I guess we know how it feels to be a Flames fan... almost

When this team is up by 5 and seemingly dominating a team, it's way too easy to get cocky - that may be exactly what we experienced tonight.  The Blackhawks have still kept up an amazing streak of 8 games in a row where they've scored 4 or more goals, Kane extended his point streak to 11 games, the power play might officially no longer be clown shoes with goals in 9 in a row... yet they end up with only 1 point and Owen Nolan wins the game in yet another shootout that goes way past the initial 3 rounds.

I'm not going to bother recapping every goal and highlight for the game because that would simply take way too long.  And I'm guessing you've got better things to do this weekend (unless you're mjthor... we all know all you do is comment on these stories).  Lets just hope the Hawks learn their lessons and remember it's important to play all 3 periods.  I know they've experience some success when they come out slow in the first, but forgetting to play in the 3rd doesn't give you much time to recover.  On to the...

This is a first but... we're giving it to Eddie-O. 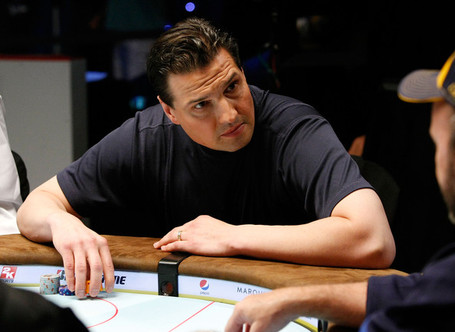 I believe an assist goes to the equipment crew, because they informed Eddie that after the goals had gone in order, Sharp, Toews, VERSTEEG!, Brouwer, Hossa... that was also each players 15th, 14th, 13th, 12th and 11th goal on the season so far.  These odd little numbers don't mean anything but they're really fun for anyone into numbers and coincidences.. That's without a doubt the coolest thing to happen in this game... is it possible this has ever happened before in NHL history?