Wait, we've got to do that another 81 times?

I know it's early and I'm still bleary-eyed myself, but I'm pretty sure I saw the sun come out this morning. But I don't know shit about shit, so I could be totally off base.

In any event, there was a fair amount to both like and dislike from last night's tilt in Colorado. Things started out well enough, with the Hawks maintaining a fairly solid edge in the possession game, and drew an early power play which Bryan Bickell (really?) converted on from inside the right circle on a gorgeous pass from Marian Hossa. After a couple other less-then productive power-plays as a result of what can best be described as Colorado's overzealousness, the Avs began to force the play back into the Hawks' zone, and Marty Turco was forced to make some high-wire saves early, and he proved up to the challenge. The Nick Leddy experience began as we thought it would,  with him getting beaten to the outside at his own blue line with a simple chip and chase by Chris Stewart, leaving Hammer out to dry. The result was a puck in the back of the net. The Avs ended up outshooting the Hawks in the first 15-11.

As the game moved into the second, the pace slowed a little bit, but there certainly was not a lack of chances at either end. Perennial slow-started Jonathan Toews hit the right post on Craig Anderson on a nifty setup from Patrick Kane, but Anderson quickly smothered any second chance. The fourth line of Viktor Stalberg, Jake Dowell, and Jack Skille also created a solid chance when Stalberg walked out from below the goal line for a stuff attempt, and Dowell attempted to move across the goal mouth on Anderson, but Anderson was up to the challenge on both bids. After a failed Hawks power play, Matt Duchene redirected an Adam Foote shot that he had just tossed into traffic, and the Avs took the lead. They would extend it on a similar play, this time on the advantage, where a shot hit a leg in traffic somewhere in front of Marty Turco, and everyone except the oddly-complected Paul Stastny seemingly lost track of it, and Stastny slid it past Turco for a 3-1 Avs lead. With a buck and a half left in the second, the Hawks drew within one when Craig Anderson was caught in no man's land slightly out of his net as Patrick Sharp cutoff a clearing attempt at the right hash marks along the wall, and threw it at a gaping net, where Marian Hossa was waiting to tip it home.

While the third period was even in shots at 14 a side, it at least felt to be more in the Hawks' favor, and the Hawks drew even on Patrick Sharp's power play goal, a shot coming off a rebound through a Tomas Kopecky screen. Though there were some chances traded once the game had been tied, the game ended up going to over time. With both Leddy and Hjalmarsson cheating below the goal line covering Duchene, he slid the puck to the right circle to find Stastny, who snapped a shot that hit Turco's elbow and dribbled in over a sprawling Leddy and Hjalmarsson. Hawks lose 4-3 in OT, but take a point on the road in a game in which they trailed by two. 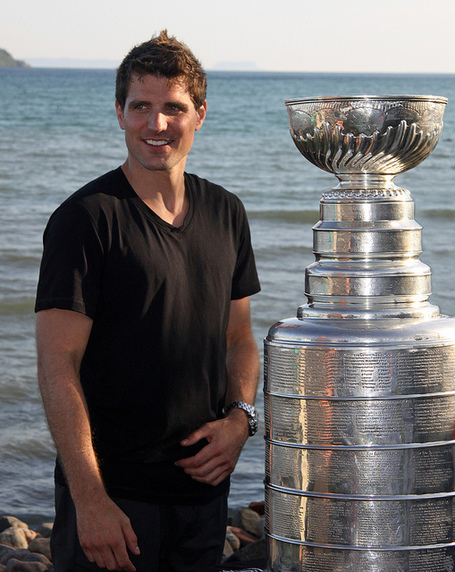 While both Sharp and Hossa had two points and were far and away the best players for the Hawks last evening, the title goes to Sharp, who factored into both the second and third goals - notching the third himself halfway through the third period to force OT.