One Last Look Back, Then Forward

Share All sharing options for: One Last Look Back, Then Forward 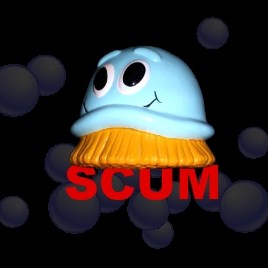 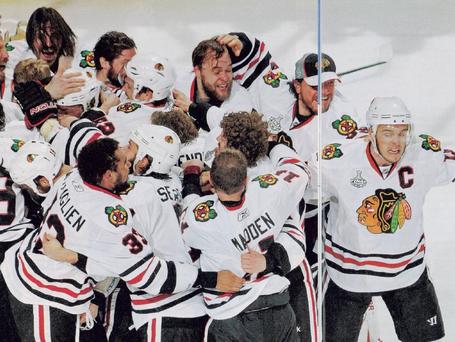 Tonight will be the last time we and the Hawks will celebrate (at least officially anyway) last season's Cup championship. The banner we never thought we'd see will be raised, as well as the division and Western Conference Champs one I would imagine. One last chance to soak in June 9th, remember where you were, and what it meant. Then it's time to kick the defense off at home.

As for the actual hockey, the Hawks have one lineup change. Nick Boynton in, Jordan Hendry out, and apparently Leddy is going to skate with Boynton and Hammer and John Scott, which makes absolutely no sense but I'm willing to see where it goes. I guess there's been some buzzing on the Twitter that Sharp is going to be out but Jahns, Kuc, and Sassone don't show anything. Until I hear from an official voice and not the ether, I'll make no such claims.

The Hawks are going to have to be about 43 times better in their own zone tonight than they were in The Can. Running around, ridiculous passes, and poor coverage, it was a buffet of idiocy. Give up 41 shots to Scum, you will lose, pretty simple. Well, maybe not that simple as Osgood is in net for them and you may only need 25 shots to score six. I'd expect a more composed performance after what will assuredly be a frantic opening 10 minutes with the energy in the building. It had better be. Also, if Pisani continues to huff and puff while trying to keep up with Sharp and Kane, look for some changes. I'd also like to see Skille and Stalberg get more ice tonight. They looked all right with limited minutes on Thursday.

For Scum, it was definitely "DUCK SEASON FIRE!" at the Joe last night as they put a foot in the ass of the Muscular Water Fowl 4-0. And Pavel Datsyuk fought Cory Perry. And might have earned a draw. Good god is Perry a penis. Also, Lidstrom and Rafalski have been split up. Sadly, we won't get to attack the broken fort that is Jon Ericsson, as he left last night's game with back spasms. Jakub Kindl will slide in, possibly with the Norris collector as that's where Ericsson was playing. Datsyuk has been moved to Zetterberg's wing, so prepare to watch their every shift hiding behind your seat.

One gets the feeling that Detroit wants to come in here badly and make a statement by ruining our Banner Night and throwing down an early marker to how they won't be run away from this year. It just seems like the kind of thing they'd do.

-Don't forget our post game get together and drool at The Bottom Lounge after the game. The triumvirate will be there, and we hope to see lots of you.

-Because of the opening ceremony, anyone heading to the game should know that sales of The Committed Indian will stop about 7 or so in order for us to get inside and see it. So come down early if you wanted to buy a copy.