It's Over and Done With: Blackhawks 2 - Kings 1

Share All sharing options for: It's Over and Done With: Blackhawks 2 - Kings 1

All's well that ends well, eh?  With the victory over the Kings the Hawks wrapped up the annual circus trip with 4 wins, 8 points and the potential to right the ship for the remainder of the season.  After a first period that was back and forth (and possibly tilted in the Kings favor) the Hawks were able to open the scoring in the second off a great all around play.  The Kings had Jarret Stoll and Ryan Smyth on a short two-on-one but Duncan Keith, who had one of his better games of the year, took away both the shot and blocked the pass attempt away from the net.  Patrick Kane, who also had a great game, actually shows some great defensive awareness and takes the stick away from Jack Johnson who was lining up for a slapper.  That springs Kaner along with Patrick Sharp to go into the Hawks zone along with Drew Doughty.  One great pass later and Doughnuts ends up on his ass in the net along with the puck.

Kane would be a factor later in the game as well when a Tomas Kopecky passing attempt does a little bouncing around and goes in off Kaner's chest.  From that point on, the Kings weren't really in it even with a horseshit 5-on-3 and a goal of their own to at least make the game closer than it should have been.  It's NFL Sunday - so to the bullets! 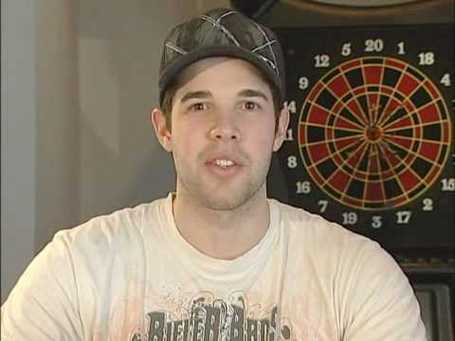 For the second game in a row - ladies and gentlemen, your new #1?  At least for now..