Share All sharing options for: Never Could Stand That Dog: Blackhawks 7 - Blues 5

Well that was certainly an adventure, eh?  That was like three games in one.  Everything started off like we'd expect - good physical play and the puck moving up and down the ice.  Both teams were getting chances until Jeremy Morin made his presence known for the first of a few times this game.  His solid forechecking led Nikita Nikitin to rushing his pass to Colaiacovo who was busy in the process of tripping while turning around.  Good work along the boards from Patrick Sharp and a quick pass to TomoKop who fires a solid wrister past Ty Conklin.

Less than a minute after the goal, many of us got our wish as Cam Janssen challenges John Scott.  Janssen is a tough little bastard and you have to give him credit for not even hesitating to fight Scott who is 8" taller and 40lbs heavier (I was originally going to write "who has 8" and 40lbs on him".. but that sounds really gross).  Scott landed a majority of the punches and probably won the fight but Janssen hung in there and even got a few good taunts in... if not a few good punches.

The Blues evened the score later in the period off a total communication breakdown on defense.  You'd probably have to consult a psychic to figure out what exactly Nick Boynton was doing... crashing into Crawford was a concern if he went to block the pass but anything could have been better than that abstract attempt at defense.

Lucky for all of us the Blues committed the cardinal sin of giving up a goal in the final minute as the Morin-Sharp-Kopecky line made its presence known again.  Morin started it with a hit again to take a Blue out of the play, springing Sharp and Kopecky.  A Sharp headfake and another nifty move gives the Hawks the lead again.  If he keeps up moves like this I won't actually complain when he's picked to go third in the shootouts.

Here's where things get insane and where I stop the goal by goal recap.  We'd be here all night... bullets from here on out: 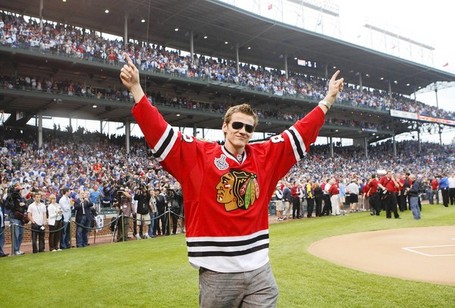 We give him a lot of shit too but 4 points is nothing to shake a stick at.  And seriously, how has no one created an actual RoboCop/TomoKop photoshop?  Get on this people.  In reality though - we could give this highly coveted honor to the entire Sharp-Kop-Morin line.  Morin in particular looks like he was doing his best to stick around long after Hossa returns.  Even his fight late in the game was a (misguided) effort to prove his worth.  Solid game all around for those three though.